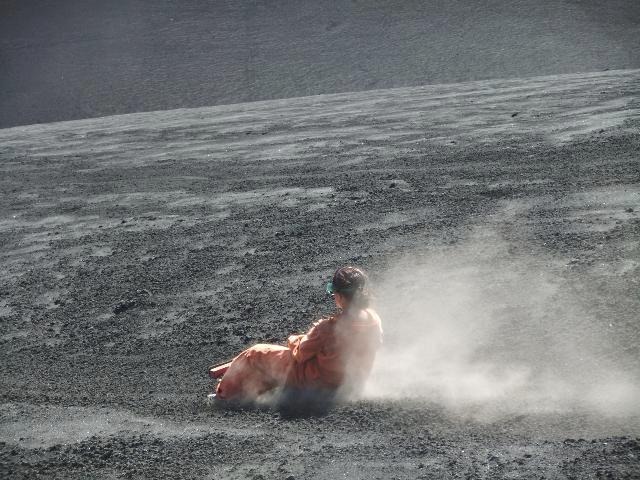 Plenty of people have hiked a volcano.  More adventurous would be hiking an active volcano with flowing red lava (here’s thinking of you Volcan Pacaya), but I had never heard of Volcano Boarding until our recent trip to Nicaragua.  From Leon, adventurers can hop on a truck and head to Cerro Negro, Nicaragua’s youngest active volcano, and board down.   Yes, it’s called volcano boarding and apparently, it’s an actual sport.

It first started when some Aussie thought it would be fun to board down the youngest volcano in Central America: Cerro Negro . He tried everything from mattresses to boogie boards. He even attempted going down with a minibar fridge! Eventually, he settled on the current board / toboggan design which is actually a simple thin reinforced plywood with formica on the underside to increase speed, and of course a rope to hold on to.  In gist, the board does not exactly scream safety regulated and child approved.

There are two groups that do the daily trip: Quetzaltrekkers and Big Foot Hostel. We chose the latter since we stayed at their hostel the previous night. The excursion is $23 + $5 for the national park entrance fee.

After touring the city and lunch, we went back to our hostel and jumped into the bed of the truck waiting for us. After a bumpy hour or so ride, we arrived at the national park entrance.

The truck stopped so we could get a photo op of Cerro Negro Volcano from a distance.

Our bumpy ride to Cerro Negro.

Ready at the base of the volcano.

Starting the hike up the volcano with board in hand.

Next came the arduous 45 minute hike. I can walk for hours, but hiking is definitely a weakness, particularly on rocky gravel. There were a few girls, including myself, who felt the burn as we went up the volcano. Eventually, Richard offered to carry my board. I felt really lucky since our guide had to hold a few extra boards for some others, and I’m sure that wasn’t easy. The hardest part was holding the board and walking against the wind. Not only were we walking against the wind with boards that could have helped push us off, we were also told we had to walk very low to the ground.  The crouching was probably the best work out.  Our guide warned us that winds usually aren’t that rough up there so we had to take a longer path and be extra cautious not to get blown over.  Thanks, for the warning…not scary at all.  At one point, Richard almost lost his glasses! It’s a bit scary when even your guide is a little weary for your safety….but we pressed on.

Not even halfway up...

Richard geared up and ready to go!

Richard's journey down!!! It took 45 minutes to hike up and a minute to fly down.

We don’t have a picture of my ride down the volcano since we only had one camera, but I eventually flipped my board as I sped down and I crashed my face into gravel. It left a pretty bruise that received many “Miss….did you get into a fight during Spring Break? You can tell us Miss…” from my students even a week after the fall. The battle scar was well worth it!

Our guide chose not to tell us the numerous injuries and accidents that could have – and recently have – occurred until the ride back to the hostel. The day before we took the ride, he guided a group and a guy broke his collar bone. In our group, someone broke their ankle.  It’s actually fairly easy to get injured, and I’m really glad I didn’t know all of the possible catastrophes, otherwise I would have gone much slower down the volcano. Richard and I didn’t come near to breaking any records like some others in our group who went close to 50 mph, but we did have an amazing and fast ride with the grit in our teeth to prove it.

I definitely recommend the experience as a must-do for anyone in Leon, but please me careful. It is definitely not as sturdy or safe as I expected.

Read more from this author at: http://travelgasms.com/