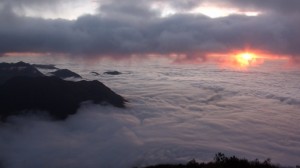 I gave Wlady no restrictions when it came to setting up our eco-adventures – just told him I love animals and want to see as many different ones as possible and that I REALLY wanted to meet some monkeys.  He gave us the plan, we proceeded accordingly…

First was Punay.  Joined by two other Americans, we piled into a couple taxis for a long drive, landing at the foot of a mountain, going higher than the clouds.  There we rented a donkey to hoist some of our things, strapped on our backpacks and began our ascent.  It was quite a climb.

At the top of the mountain, far above the clouds, we found an ancient pyramid in the shape of the sacred Guacamaya bird.  Carbon dated at 2400 BC (pre-Mayan, pre-Incan) it’s quite possibly the oldest man-made structure in the Americas.  And it was lost for thousands of years.

Largely undiscovered, I may be the first person in history to film the place, which is important because  the site needs protection.  Regularly assaulted by looters and grave-robbers, it’s dotted with holes.  Hopefully, we will help Wlady gain some well-deserved recognition for Punay.

The view from the top, especially at sunset, when the great golden orb slides down between the cloud layers, is astounding.  According to the mythology, it’s a place of the gods.

That night, in a restless sleep, packed in a tent with my comrades like sardines at the top of Punay, I had the most intense dreams.  In those dreams, I was receiving messages from god-like entities.  Messages about purpose and why I was there.  Messages that I am on the right path, to beware of demons that may appear human.  They speak in a strange whisper tongue and can suck the life from you.  I have never been a religious person, but these were some powerful dreams.

In the morning, we made our way back to Riobamba to regroup for the next adventure.

We headed to Chimborazo.  There we met our local guide, Darwin, and rented six horses from the indigenous people.  Wlady’s idea to support the local families this way has made him very popular in the area.  We saddled up and made our way into the endless mountain range.

Moving along at a comfortable pace, we were delighted.  We didn’t understand that we were on a time budget.  If we didn’t make it through the mountains by a certain time, we were going to get wet.  Sure enough, what originally looked like  gray haze in the distance, soon consumed us.

With an occasional whip to the ass, the horses were galloping quickly, taking us for quite a bumpy ride.  Our butts took such beatings!

Finally we arrived in Salinas.  Moments after stepping into a little restaurant where we would eat, it began to pour.  I felt sorry for the horses waiting outside.  We warmed ourselves by the fire, drank some hot tea and had some pork chops and potatoes.

What’s amazing about the remote town of Salinas, deep in the Andes mountain range, is the way they’ve figured out how to protect and ensure their own economic survival.  We went to a co-op, where women in the area sell their woven goods: scarves, sweaters, hats and gloves of wool and alpaca.  We visited the chocolate factory, where they make some of the world’s best chocolate.  In Salinas, they also produce some of the world’s finest cheese.  It’s a rare community that has almost completely eliminated immigration to larger cities, because there are ample opportunities for work in Salinas, either at the cheese and chocolate factories or through the local co-op.

The next day, we mounted our horses, forging our way over and through the mountain range in what turned out to be the greatest physical challenge  of our trip.

Several hours into the trek, weakened a bit from altitude sickness, I lost my perk.  Five hours slowly turned to six, seven…  At one point, climbing through rocky terrain, my horse lost it’s footing.  Then, right on schedule, the thick white clouds came, swallowing us in a milky abyss.  Then hail.

Coming down the steep, slippery and jagged terrain, we had to dismount.  It was just too dangerous to risk toppling over (or under!) a horse.

A little bit longer, right around the next bend, five more minutes, became an eternity.  The hail turned to rain, then more rain, accompanied my booming thunder and lightening.

Wlady knew we were fatigued, so the first (and only) truck we saw, he flagged down and asked the driver for a ride.  Eager to rest our bums, we handed the horses over to Darwin and clamored into the truck.  Two of us sat in front, the rest smooshed in back, making little nests for themselves in a full load of fresh garlic.

The garlic truck took us for about five minutes (in the direction we had already been going for at least five hours), until it stopped at a lone house, where several people came out to see the spectacle.  A few chuckles later, we were on our way again, this time on foot.  Another truck came along – this time empty in back – and we jumped on in.  Finally we arrived at some hot springs, two steaming pools full of indigenous people (mostly children), as remote as can be, in the mountains.

On our last day, we found an even better hot springs location, Banos.  Banos is a popular tourist town, largely thanks to the gorgeous mountain view at the local hot springs.  Next, we passed through Puyo on our way to Zanjarajuno, a jungle animal rescue and ecological research center.  There, we followed our guide down a long path through the jungle, stopping here and  there to make monkey calls.

It only took a few minutes until monkeys were coming at us from all directions.  Naturally, we gave them bananas.

To set up your own Ecuadorian eco-adventure, contact Wlady Ortiz at Ecuador Eco Adventures. 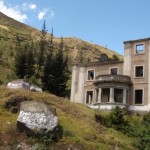 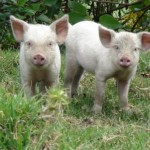 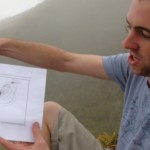 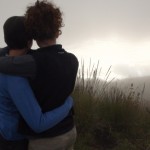 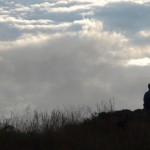 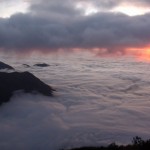 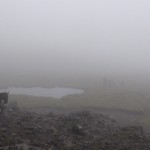 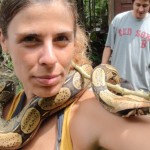 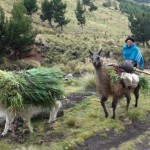 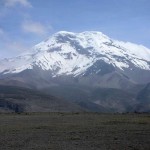 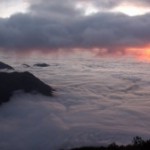 Here’s a video I made, from Mt. Punay:

Read more from this author at: http://audreality.wordpress.com