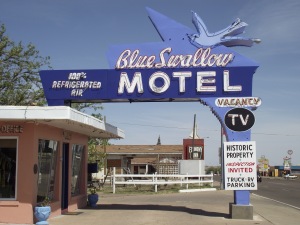 Featured writer: Writer On The Roadway

“The world is a book and those who do not travel read only one page.”- St. Augustine

Crossing the state line of New Mexico places you into the Land of Enchantment. Hit the rest area first because these are far and few in the state. Set your watch to mountain time and move forward through desert terrain. While here, a visit to my friends, Mike and Betty Callen, owners of the Tee Pee Curios takes place. During the heyday of Route 66, his aunt and uncle ran this teepee shaped building that is along the stretch of road that boasted of numerous hotels for travelers. Mike is an avid photographer whose work is in past issues of the Route 66 magazine and recently a 2012 calendar. He is also one of the consultants for the original Cars movie in regards to the Mother Road history.

My first encounter with Mike was through the book, Route 66, Lives on the Road. He gave me the strangest look when I stumbled through the door of his business, book in hand, star struck asking for his autograph. During that time he was quite and probably wondering who this nut was, but he autograph the book and tolerated my chattering. Now we are close due to emails, postcards that I send and the occasional visits when I stop by as I cross New Mexico. Hugs, big grins and stories of his latest work fills the air during these visits and my heart warms when I see my friend and his wife. For fun, stay at the Blue Swallow Motel, a famous find on the route. Read the history regarding the motel and it’s symbol at, www.blueswallowmotel.com. You can also follow the renovations on Facebook.

Driving 75 mph, (yes, it’s the speed limit) I look to the right at the partially used old route that I traveled years before. It seems to call out, “remember me?” The desert, mountains and endless road past Las Vegas and Vaughn. Santa Rosa has always been my midpoint to refuel and for old times sake I pull into my favorite gas station, Love’s. Long stretches move past Cuervo, with vacant buildings that I explored in the past when I thought I found a ghost town. After going through numerous buildings, I located an old beauty shop with a left over chair with an attached bonnet hair dryer. As you head towards Albuquerque, don’t forget to stop at Clines Corner. You can gas up, grab a bite and pick up some fun gifts. It’s a testament to “standing your ground” as it has weathered change from numerous highway and road developments. In the odd event of bad weather, that bright sign is beacon of hope. The town of Moriarty comes into view. Through my connections during my first turn on the road, I was told of a hidden, defunct old curio shop that housed an old orange snake pit outside. As I drew closer to the pit, my heart picked up pace along with my rapid breathing. Tumbleweeds and leaves, not snakes occupied the pit. My imagination at work.

Is it Alburquerque or Albuquerque?

The second spelling is the correct version when the decision to drop the extra “r” was made. Albuquerque is New Mexico’s only metropolitan area. “The Duke City” is usually bypassed for Santa Fe. I have a past history with this town and the following are my favorite things:

1. The Albuquerque International Balloon Fiesta. You don’t know anything about balloons until you participate in the Fiesta, 9201 Balloon Museum Drive N.E. & 4401 Alameda. It is the nations largest hot air balloon rally during the early month of October, this year held the 6-14, 2012. It is also the most photographed event in the world. Arrive early to view the magic of the balloons coming to life and then racing across the sky. Many events are available that are fiesta related, for example, the Balloon Glows. (www.balloonfiesta.com)

2 Instead of flying a kite, take a ride in a hot air balloon. It is an unexplainable sensation that you won’t forget as you sail above buildings and trees. During one of my flights, the smell of blueberries tickled my nose as we rode above a cereal plant. I’ve had rides with two different companies with collectible balloon pins and certificates to prove it. Later, a celebratory breakfast by the crew is given.

3. For good food that won’t leave you begging for more, my two all time favorites are as follows; The first is Flying Star Cafe which serves up meals only a mother could love. Try the chicken fried chicken with mashed potatoes, a homemade biscuit and gravy. For early risers or those who like breakfast for lunch or dinner, treat yourself to a BYO Omelette or the Country Breakfast and stay awhile. There are numerous locations but my hangout is 200 S. Camino Del Pueblo in Bernalillo. The restaurant is spacious, the staff is friendly and the manager, Sheryl Santora, is a sweetheart.

4. My second choice is the Route 66 Diner, 1405 Central Ave. N.E.. This is a throwback to the days of rock and roll, milkshakes, ice cream floats and blue plate specials. I was so addicted to their red cream soda floats, that I had to attend a detox program! The location is on Central Avenue leading to some of the old motel signs of Route 66 and shopping in the Nob Hill area.

An overnight night stay at a local hotel leads to early morning drama like the stage production from A Streetcar Named Desire. I unwittingly held the supporting actress role due to a persistent knock at my door from a stranger looking for his lady friend. After five minutes of convincing him that she was not in my room, he paraded up and down the hallway yelling out her name! It was time to go. The light rays of Easter morning brought its freshness to the cool air that surrounded me. Moving up hill and westward, a glow along the skyline is a tip-off that the Route 66 Casino continued to entertain the last to go home and the first to arrive bunch. Traveling through several reservations, the car moves past Laguna and Grants, while the scenery of the desert provides the backdrop for numerous trains crossing the plains. Sometimes four to five engines pull three or more miles of cars that twist and bend with tracks that disappear into the foreground.

It’s during these lonely moments that I’m grateful for XM radio. One of my favorite stations is RadioClassics (Ch-82) with Greg Bell as the host. The endless miles seem to rush by as I try to concentrate on the story lines of Johnny Dollar, Dragnet or Gunsmoke. Sometimes the unbelievable tails from The Whistler, Suspense and X-One, keep my nerves on edge while passing away the hours.

I cross the famous Continental Divide with an elevation of 7,245 FT.  Finally, I reach Gallup, a testament to Indian art and crafts. You will also find the famous El Rancho Hotel, home to the stars during the hotels Hollywood heyday. My room during my first stay years ago was the Sydney Greenstreet room. For non movie buffs, he played the hefty character in the movie, The Maltese Falcon, starring Humphrey Bogart. More fun awaits across the state line to Arizona and the Petrified Forest National Park. (Above photo, Tee Pee neon sign, Mike and Betty Callens)

Read more from this author at: http://writerontheroadway.com/