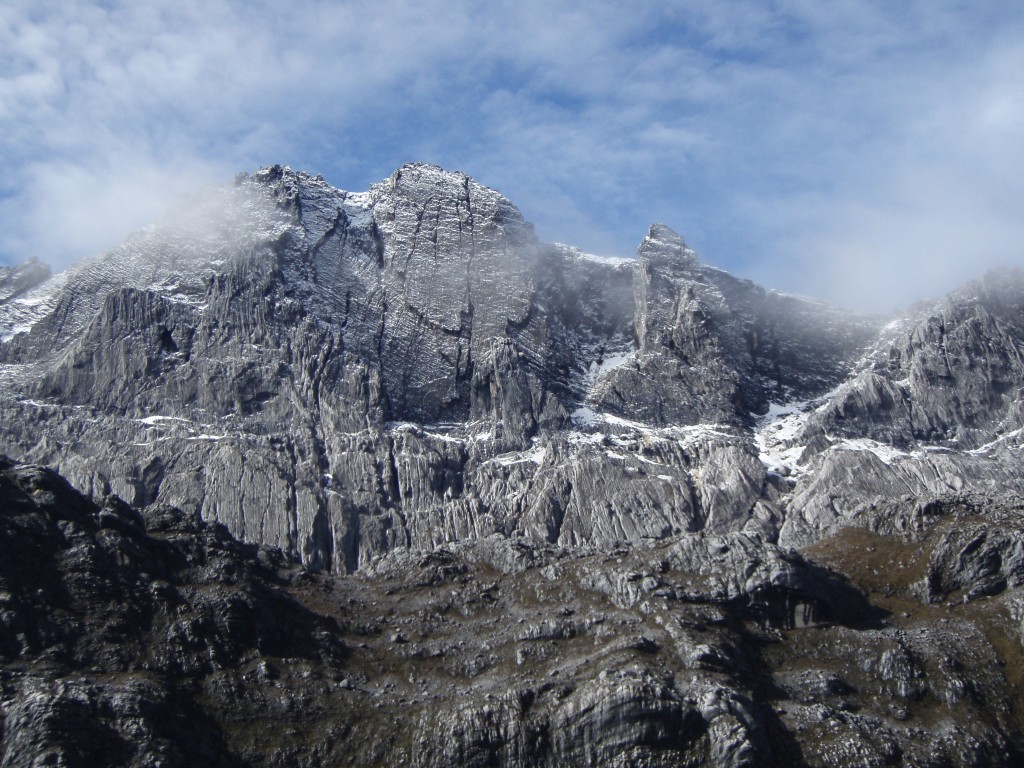 Logan Wetherell on the Tyrolean Traverse

It had been a few years since the last time I had been able to take on this epic adventure, the tyrolean traverse between Old Man and Old Woman rocks in the upper North Umpqua river area. Established as an annual tradition by Greg Orton for the UCC Rock Climbing 2 classes five years ago, I was determined to go this time. Last year I missed it because my baby girl Julia had just been born, and the year before…I can’t even remember why I missed that one. In any case, the climbing gods were being kind this year (as was Greg Orton), since the climb would be held the day after little JuJu’s first birthday. I was really pleased to be able to do it again. A crag near Old Man

I woke up at 7:30, got dressed, made some tea, and left an hour later when my friend and climbing partner Harold Hall picked me up. We headed out and met up with Greg at the Glide Store. We left Harold’s truck at the store and got in the bus with the rest of the teachers and students. All told, there were twelve of us going on this trip: 5 students, 6 teachers and Tyler, one of the teacher’s 13 year old son. As we drove up the winding Highway 138 towards the crags, we watched a climbing movie called Front Range Freaks. After half an hour of driving, we arrived at the trailhead, gathered our gears and set out.

I had been sick for the previous four days so I wasn’t sure how much my fitness would be compromised, but I was pleased to discover that I could keep up with Logan, one of the teachers who was in the lead for the hike, and we arrived at the base of the rocks in about forty minutes. We scrambled up the last part of the steep trail and then climbed up the steep, loose gully that takes one to the very toe of the rocks.

We organized our group into climbing teams, sorted gear and then the climbing began in earnest. Almost everyone went up Old Man – 9 of us – while only Harold, Bobbie and the young climber Tyler went up the substantially easier Old Woman.

With a group of this size, it took quite a long time for all nine of us to get on top of Old Man. It is a two-pitch (two rope length) climb, and the the base of the second pitch is a small notch with room for only three people, so it was several hours before I was able to head up, especially since I was running the sweep position, collecting gear and setting up the haul bag.

The view from the base of the climb

I have to make a confession of stupidity here. I had decided to wear my pack while I climbed, which probably had fifteen pounds in it, since I had done this climb before and I thought it would add a bit of challenge to the rock climb. I could have added the pack to the gear-haul line, but oh no, I just had to make it more difficult. As it turned out I would really regret the decision.

Heading up the first pitch was no problem, I made good time, I wasn’t struggling at all, and I felt strong. I reached the notch in just a few minutes. Our rope team waited for about ten minutes before the last person on the team ahead of ours headed up, and about fifteen minutes after that I was tying in the haul bag and then heading up myself. As soon as I got on the second pitch I regretted wearing the damned anchor on my back. I thrashed, I struggled, and for a time I wasn’t certain if I would be able to do it at all. Somehow I managed to get myself up, cleaning gear and freeing the haul bag where it had gotten stuck in a crack. Once more I had the opportunity to attach my backpack, but I am apparently a glutton for punishment.

Dome Rock from the summit of Old Man

A few drops of rain began to fall. Okay, no big deal. Then it began to rain a little harder. Shit. I took a look behind me and saw a wall of water bearing down. You have got to be kidding me. Here I was, last one up, already struggling, and I was about to get poured on, making what was already a fairly difficult climb into a desperate thrash.

The final twenty feet was incredibly difficult. Only rated at 5.7, with a final 5.8 move, I should have flown up the crack, but I really had a difficult time with it. Partly was the weight on my back, but a good deal of the struggle was due to the now-soaking wet rock. I slipped, I slid, I tried one move, then another, with no success. Finally I decided to just pull on the gear I needed to clean, something I ordinarily would not have done, but at this point I just wanted to get it over with. I yarded on the gear, flopped myself into the final, easy gully, and breathed a sigh of relief. I scrambled up to the summit, with a few choice words for the rain gods and my stupidity in wearing the pack. Greg had a good laugh when he heard my colorful descriptions of what I had just endured.

Since I was the very last person to get on top of Old Man, the lines between the two towers had already been established (by throwing a rope across the 100 foot gap), and half an hour later Ray (one of the leaders and a really talented climber) went across first. I set up my tripod and filmed as he crossed safely. One by one, each of the students, teachers and even 13-year old Tyler took their turns making the incredible passage. A few of the students asked to wear my GoPro wearable POV camera, so I got some spectacular footage of their turns on the line.

I was one of the last ones to go, and I connected my harness to the rugged pulley system that would guide me across the yawning chasm – it is about one hundred feet across and about two hundred feet high. It was nice to be able to set out without a lot of fear clouding the experience. The first time I did the traverse, five years ago, I had felt terrified standing on the edge of Old Woman, and I really had to psych myself up to step out into empty air, but this time it was no problem. I pulled myself along the rope, hand over hand, still feeling the draining effects of the climb. After thirty seconds I was standing on the opposite side. Now was the fun part. I stepped off, held onto the carabiners connecting me to the pulley and let gravity do the work. I zipped across to my starting point in just a few seconds. It was all over too quickly.

Then, before we knew it, it was 5:30 in the afternoon and time to head down. The lines were dismantled, anchors taken apart and one by one, the students rappelled off Old Man (a spectacular event in its own right).

We gathered at the base of the rocks, packed up and headed out. I ended up arriving home at 9:20, nearly 13 hours after I had left, and 3 hours later than I had told my family I would be home, so I had some irritated family members to contend with, but they eventually forgave me, and all was well again. Nonetheless, it had been a great day, and another spectacular tyrolean between Old Man and Old Woman.