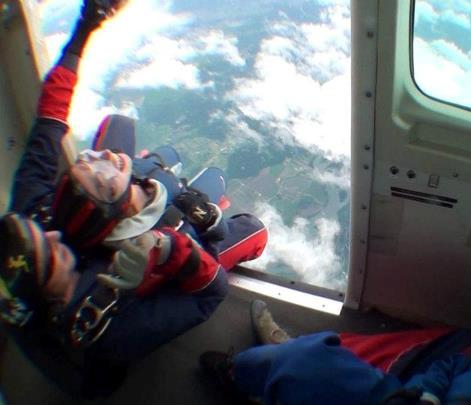 I’m coming back from the weekend high (pun very much intended) of skydiving for my 25th birthday.  It was incredible!  No exaggeration, it truly was a phenomenal experience and I might just be hooked.  Skydiving really is a dream come true for me, I’ve wanted to do it for 10 years now.

My birthday was unforgettable.  I think I mentioned that my dad and youngest brother are visiting me over the weekend.  They’ve been crashing on the floor of my tiny studio house – very close quarters for 3 people but I’ve enjoyed having them here.  Just after noon we made the drive down to Skydive Snohomish.  We met up with one my girlfriends (T”) who wanted to join us on the dive.

Before too long we were watching a video in the lobby, practicing our skydive positions on the floor, and feeling the butterflies in our stomachs.  Our group of 4 was the first to be loaded on the plane according to the manifest, so then it was to the Tandem Staging Area.

We each were introduced to our personal skydive instructors.  My instructor was a guy named Luke “Skywalker”.  He handed me a navy blue jumpsuit and helped me into the full-body harness.  A little chit chat and a few moments later we were heading to the plane.  It was definitely the smallest plane I’ve ever been it, no insulation on the inside, no chairs, seat belts were attached directly to the floor.  We all sat down between our instructors’ legs and they attached our harnesses to theirs.  Seated backwards in the plane, we were facing the plexiglass, sliding, overheat door at the end of the fuselage.  Our pilot had us taxiing down the runway and in the air within minutes.  It took about 15 minutes to climb to 14,000 feet above the clouds.  J was the first one out of the plane, followed by DJ, then myself, with T bringing up the rear.

Luke and I scooted to the doorway, I grasped my harness in a safety position, let my legs and head fall back and then we were dropping through the air.  I could help it, I started laughing like a fool (full disclosure: you could probably call it giggling).  We were free falling for a full minute that passed in a blur of speed and exhilaration.  I could barely breathe, we were falling so fast that the wind took my breath away.  For that minute I couldn’t stop laughing.  Out in the distance I could see the Seattle skyline, beautiful Puget Sound, the Cascade Mountain Range, everything.  And the ground looked like a patchwork quilt.

Then Luke popped the chute.  It’s nearly bone-jarring to go from falling at 120 mph to suddenly only 20 mph.  Luke had been video taping my dive with a camera and when he pulled the rip cord the force was so strong that the video camera smacked me in the mouth.  I could taste my own blood but it seemed a small issue in the scheme of things.  We were now floating gently in the air and I could see J and DJ floating by too.  We waved wildly, laughing.  Luke pointed out some of the major landmarks to me.  I could see why he’s been an instructor for 10 years now, the views were breathtaking.  Luke handed me the control cords for the parachute after a while and I got to send us into dizzying spirals.  A short 5 minutes later we neared the ground and landed easily.

I was unclipped and saw DJ walking towards me, ready with a big hug.  And then J was right behind with an embrace.  We had made it through such an amazing experience together and were overwhelmed with a sense of comraderie!

To read more from this writer check out her blog: Dangerously Daydreaming