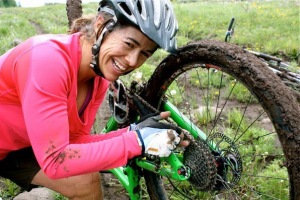 Depending upon who you talk to, the name Alison Gannett can mean a lot of things. To a ski-bumette, she is a rad skier who holds her own as a professional world-champion big mountain free skier; to us green babes, she is an innovator in the eco-friendly way of life who actually “walks the talk;” to a bike chick, she is a kick ass mountain biker who manages to take her skills on the snow to the trails; and to a novice at almost any extreme sport, namely, skiing, mountain biking, or surfing, she is an amazing teacher who knows exactly how to ease women into their next personal level of fitness.

During this summer’s Bike Week, here in Crested Butte, I was lucky enough to be able to take one of her skills courses. A small group of women came together, most of us beginner bikers who were scared to go to that next scary and thrilling level. With the help of Alison’s excellent teaching strategies, we were all cruising over obstacles that had always been daunting on the trails. So, thank you, Alison, for the power you provided each of us in the saddle.

Ms Gannett was gracious enough to answer a few questions ranging from her skiing career, being a ski-bumette, her local Paonia farm, and why she loves our valley.

Q. When did you start skiing and when did you decide to go pro in the sport?

A.   I was full bore into my environmental career when a Warren Miller film crew saw me free skiing in Crested Butte and asked me to be in their movie. They talked me into competing, which was a tough but rewarding route into my new career as a professional skier. I was a teased traumatized chubby dorky math geek, always sucked at conventional sports, even kickball.

Q. When you were/are unsure of a situation on skis or on a mountain bike, how do you get through it?

A.    I now try to put aside the little voice in my head that tells me I can’t do something, think of some situation similar that went really well, and then talk myself into the fact that I am a strong powerful person that can do this, and then I try to stop overthinking and just go.

Q. What made you want to start Rippin Chix, and what is you favorite part of teaching a clinic?

A.   I started Rippin Chix in 2002 because I realized that sports had given me incredible confidence that spilled over into my everyday challenges in life. I also realized that not many programs were teaching women in baby steps, women were being turned off from sports forever because some guy’s only advice was “just go for it”.

Q. As a respected female bad-ass, have you ever felt that being a woman has created more obstacles for you in your career advances?

A.   Being a woman has been a bit tough, as my sports are very “dude” centric, with T and A for gals being more important than talent. I wanted to prove that gals could ski crazy lines and jump big cliffs. Sometimes it has paid off being a woman with perseverance, as some ski companies would hire me to do women’s designs as they only had men in the office.

Q. How did skiing affect your outlook on environmental issues?

A.  My favorite thing about skiing was not the championship titles or starring in ski films, it was creating my own women’s only ski expeditions to wild countries and places that had never been skied. Since I wanted to marry my career as an environmental scientist, I would photo document glacial recession. For my Global Cooling Tour, the most powerful part for most people is seeing that lines I skied just ten years ago are now gone.

Q. What led to your decision to buy a farm, and what is your favorite part of running it?

A.  I have been trying to walk the talk for over ten years now, especially after working with some people like Al Gore, who inspired me to not do what he was doing. I wanted to reduce my carbon footprint and see what worked and what did not – firstly starting with travel, then house, vehicle, and ultimately the biggest elephant in the living room – FOOD. My favorite part is bringing weeds to the pigs, and my least favorite part is letting the chickens out at 5:30am.  The cool part of this giant experiment, is that we have halved our carbon footprint with keeping an outdoor sport lifestyle!

and just for fun,

Q. What is your favorite thing about the Gunnison Valley?

A.    My favorite thing about the Gunnison Valley is all our trails and public lands! We often take for granted what many people don’t have!