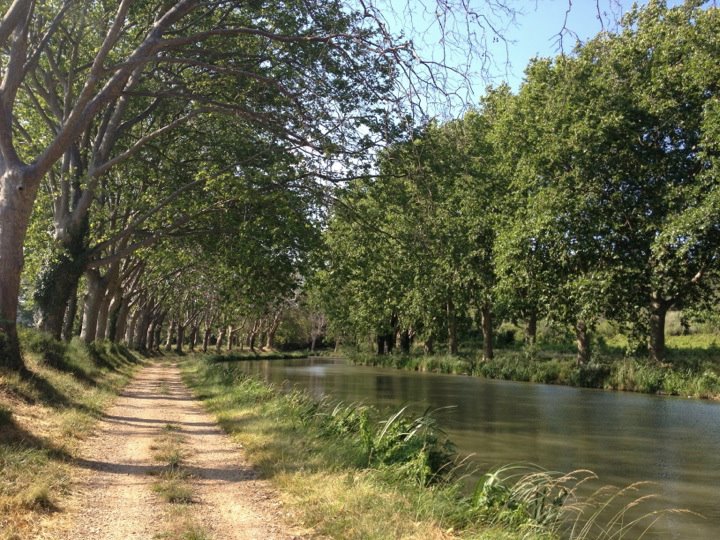 While traveling, it’s often the places you hadn’t planned on going that become favorites. The Canal du Midi, a series of waterways linking Toulouse to the Mediterranean, was one of those places. We had a two-night gap in our itinerary between leaving London and arriving on the doorstep of our friends in Barcelona, and we thought we would spend those days in Granada seeing the Alhambra, but the arrangements became too complicated.

Serendipity intervened when I looked at a map and realized that southern France was a quick train ride from Barcelona, and that if you combined the Eurostar with the TGV, it was an easy trip from London (even when your rolling suitcase gets caught in a turnstile at the Gare de Lyon, causing the zipper, unbeknownst to you, to break, and as you are traveling up the escalator, you hear your 13-year-old daughter ask why your laptop has its own step on the escalator) to a small village about 15 km outside Narbonne, Salleles d’Aude, where we planned to spend the next day cycling along the canal’s towpaths.

Our hotel, a converted former wine merchant’s home with about five guest rooms, overlooked the Canal de Jonction, and the night we arrived, we ate dinner, prepared by the owners, with all the guests. Appetizers and cocktails on the terrace followed by cold tomato soup, chicken with couscous, apple tartin, a cheese course in the dining room, finishing with coffee on the terrace. There were 14 of us total, and we all sat at a long table, an international group with people from the States, the UK, France, and the Netherlands. For us, as the Americans, we were asked a lot of questions about the US healthcare system, which most of them think sounds insane, and what we thought of Obamacare (we’re for it) and whether we thought Obama will win in November (we certainly hope so).

Our hotel in Salleles d’Aude

One of the reasons I wanted to cycle along the Canal du Midi is that part of what makes it unique will soon be gone. A UNESCO heritage site, the Canal du Midi was built in the seventeenth century as a shortcut between the Atlantic Ocean and the Mediterranean Sea. Designed by a tax-collector/farmer, Paul Riquet, who built a model of his envisioned canal in his yard, it took almost 30 years to complete (1667-1681). The 240-km canal has 91 working locks, hundreds of bridges, and several viaducts. The canal is no longer used for commerce. Now, people use it for pleasure, cruising the canal and its lovely villages and scenery for vacations.

One of the canal’s defining features is the 40,000+ plane trees, planted in the early 1800s, lining its sides that prevent banks erosion and provide shade, and in some areas, have almost grown together from both sides, creating a tunnel effect when you look down the canal. The trees are so large that many of the roots have burst through onto the towpath (so you have to pay attention when biking!).

Diseased by a fungus that experts believe was carried to France in GI ammunition boxes, the majority of them are slated to be cut down and replaced with disease-resistant trees, a process that will take many years — both in terms of cutting down the trees and the time it will take for their replacements to grow. Along the path, you can see the trees currently slated to be cut down. Every time a diseased tree is found, it is marked with two green lines, and two trees on either side are marked with one green line to be cut down to prevent the fungus from spreading further. If there are several diseased trees in an area, the row of trees marked with green can be quite long.

We wanted to see the Canal du Midi in all its tree-lined glory.

Before our rental bikes were delivered to the hotel the morning of our bike ride, the owners helped us plan a route that would involve riding along the canal path as well as riding along roads to see the countryside. Mr. Miscellany and Ruby rode a tandem (Tip: Having a parent and teen ride a tandem makes a more pleasant day for everyone on a cycling excursion). We rode along the Canal de Jonction to its intersection with the Canal du Midi, where we headed to the village of Le Somail. We left the canal path at Le Somail, taking small roads to Cabezac where we had a late lunch and toured L’Oulibo, an olive oil cooperative. As we biked toward Ginestas, we were caught in a short-lived downpour. Ginestas is at the top of a series of hills, and as we crested the final hill, we had a panoramic view of the countryside. We rode back down to the canal, and not quite ready to return, we biked farther along the canal before turning around to return to Le Somail, where we bought a picnic dinner and ate it along the canal before cycling back in the twilight.

Lock along the Canal de Jonction

At a lock station

Canal de Jonction at Salleles d’Aude
Read more from this author at http://www.margaretsmiscellany.com