Life On The Edge – Motorcycling Through Costa Rica 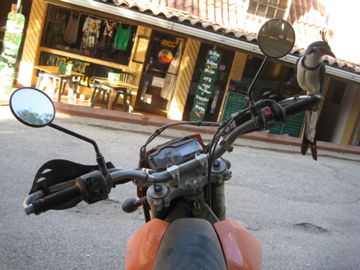 In September of 2009, I decided to get my motorcycle license. It is something that I had been talking about doing for a few months and I decided enough talking about it, DO IT! I signed up that night for a class that started the same weekend.

A mere 6 months after getting my license I, along with 2 friends, booked a trip to Costa Rica for an 8 Day Enduro Motorcycle On/Off Road adventure!! Every night we would be in a different city. Our days would be spent transitioning from one city to the next. We had no idea where exactly we would be going to get from point A to point B but it would be an adventure for sure!

I’m not going to lie and try to sound like superwoman, this tour was life changing and at some points, it was grueling. I pushed my body and mind everyday to the beyond the limit. There were lots of laughs and tears, sweat, blood, bruises and broken bones. There was some of the most scariest moments you could ever imagine as well overwhelming senses of triumph.

The first day of the trip we arrived in San Jose and was greeted by our tour guide for the trip, Wayne. Once we collected our luggage, Wayne whisked us away to Atenas so we could get settled into our hotel. Since we arrived somewhat early in the afternoon, we had plenty of time to explore the Costa Rica countryside before it got dark.

Beautiful view from the first hotel in Atenas

Before we knew it, the day had flown by and it was time to get some sleep. Actually, attempt to get some sleep. The next morning was the official start of the tour and I was super anxious for what the next 8 days were going to bring our way.

It was an early wake up call to start the day. As breakfast was ending, Wayne arrived to pick us up and take us over to his house so we could pick out the motorcycle we would be spending the next week on as well as get it all packed up with our gear.

So many to choose from!!!

Originally we were all going to be on KTM 690s. However, once we arrived and I had the chance to sit on the 690, I realized there was no way I was going to be able to do the tour on that bike given the height and the weight of it. Luckily, Wayne had a Honda 250 on had. It worked perfectly!!

Once we had our bikes and the gear loaded up, it was time to start the tour!!! I had no idea what I was in store for!

Being in a new country, not knowing where you were going or what to expect all while being on a motorcycle lead to some serious excitement that first day! There was no starting out easy either. The first day consisted of crossing over the mountains. To get over the mountains, we had to travel on a dirt trail which consisted of trenches as well as loose rocks both big and small.

To add to the challenge, to the left of the trail was a cliff and to the right was a mountain wall. The trick was to choose your line and don’t double guess yourself. One wrong move and, well, don’t make a wrong move!

By the end of day 1, I was exhausted. After dinner, it was lights out.

Day 2 arrived and I was very excited. On our way to the next city on the tour,  we were making a stop in Arenal to go zip lining by the volcano!  The view was beautiful! and did I mention it was next to a volcano?!?!

Day 2 started our great but sadly, it took a turn for the worse. After we left zip lining, we started to make our way to the next city. In the middle of nowhere, on a gravel road, one of my friends crashed his motorcycle. He slid under a barb-wired fence, which only managed to snag his motorcycle jacket.

After many hours and 3 hospital changes, we were informed that our friend suffered 3 broken bones in his arm and a broken femur. By the next morning before we even got out of bed, he was already out of surgery with rods and pins in place. No casts needed. He was fortunate enough to have the best surgeon in Costa Rica perform his surgery.

Now the 3 of us remaining on the tour had a choice to make, a hard choice. Do we stop the tour and spend it in the hospital with our friend, or do we continue on. Once we heard that he was only suffering from broken bones, no internal bleeding or anything more serious, we started the debate. We were able to speak with him on the phone once he was out of surgery and he made the choice for us.

He told us that since he was ok, he insisted we continue on with the tour as he would be angry with us if we didn’t do it for him. Once the decision had been made, we were able to work it out with the guide so we could go visit him in the hospital one day.

Everything after the crash was amazing and sad at the same time.  So with everything from this point on, just know, even though our friend was in hospital, we didn’t go a minute without thinking about him.

Each day of the tour presented a new challenge, a new adventure, a new experience. This included spending 2 days surfing in Santa Teresa.

The tour lead us to Mal Pais, Santa Teresa, Jaco, Tamarindo area, and Manuel Antonio. Those were just the cities we stayed the night at. On our way to each location we visited cities that aren’t even on the map.

Since we were on motorcycles we were able to travel roads and non-road most tourist never get to see. We rode through the jungle, river crossings, dirt roads and of course, mountains!

Lunch was always somewhere off the beaten path in a very secluded area. We even got to load the bikes on a ferry to cross the Gulf of Nicoya.

Ferry ride in the Gulf of Nicoya

Lunch on the Costa Rica mountain side

Rest spot on the beach

Last day of the tour

During the trip, I conquered so many fears and overcame so many challenges. However, there was one mountain that conquered me. It pushed me to beyond my limits, it pushed me to tears. In the end, I had the guide ride my motorcycle up to the top. It was a long, lonely walk to the top for me. The feeling of being defeated was hard. Everything up until that point I had done on my own. However, once I reached the top, I didn’t have time to dwell on it, there was more riding to be done!

After 8 days on the road it was time to head back to the guides house to wrap up our trip. Words can’t describe the feelings I experienced as we pulled into his house. I was overwhelmed with accomplishment, happiness, memories and dirt!

Greatest moment of my life!

Shortly after the above picture was taken, we were reunited with our friend at the hotel. We all enjoyed a post trip drink before we had to fly off back to the US the next morning!

Read more from this writer at: http://adventurouswanderings.com/