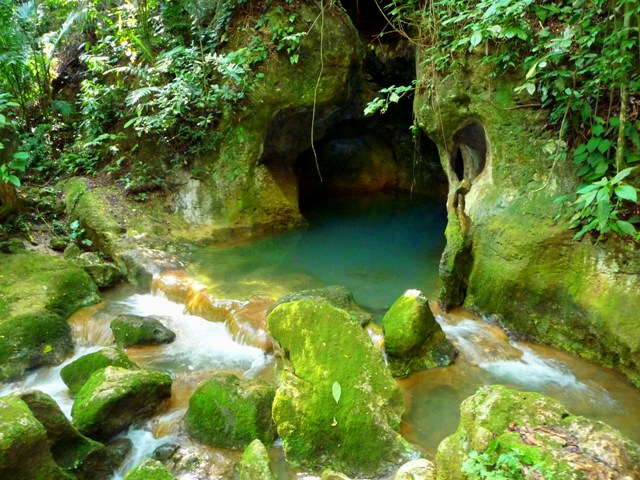 After an hour long drive and a forty minute hike, we arrived at a place that might have been Eden. The entrance to Belize’s Actun Tunichil Muknal cave is submerged in a pool of water made ice blue by dissolved minerals. The morning sun flickered through the trees, illuminating the vibrant greens of the jungle trees and moss covered rocks. It was peaceful, lovely and alive.

Appearances are deceiving, though. This wasn’t the entrance to paradise. It was the opening to Xibalba (”shi-ball-bah”), the underworld of the ancient Mayan people. The story told here is not one of creation, but of sadness, desperation, and decline.

We went to Actun Tunichil Muknal to simply explore another cave system, the fifth of our recent travels. What we found instead was something unlike anything we’ve ever seen.

Our descent into Xibalba began with a short swim, away from the leafy jungle and into diminishing light. From inside, the view was perhaps even more striking; the bright colors of the outside world rendered more vivid by the interior darkness.

Turning away from the light, we set off into the cave. We scrambled over rocks and squeezed through crevasses, each obstacle made more challenging by an onslaught of rushing water.

On the threshold of the ancient Mayan underworld

Before long a bend in the cavern brought us to a threshold of sorts. We shut off our headlamps and experienced the cave in its natural state. Behind us, the faint glow of sunshine was still visible. Ahead, only inky blackness. We stood at the point where natural light ceases; where creatures of daylight give way to those of the underworld. Our world lay behind, Xibabla ahead.

I wondered about the Mayan, delving deeper into an unfamiliar environment they greatly feared. Their flickering torches casting dancing shadows in every direction. Did they imagine the shadows to be those of taunting demons? How could they not?

Pressing through the shadows and the water we eventually arrived at a place of significance. A short climb up flowstone led us to a series of chambers; nine in all. Coincidences are funny things. Perhaps it was fate. The Mayan ventured into their underworld and deep inside found exactly what legend foretold: the nine layers of hell.

At the beginning of these chambers we encountered our first artifact: a broken pot left behind more than a millennium ago. At one time it was filled with food, or drink, or some other cherished commodity and offered up as an appeasement to the gods.

What did the Mayan hope to accomplish? What suffering were they seeking to end?

As we moved deeper into the nine planes the styles and arrangement of the vessels became more varied, their concentration more dense. Was this a sign of desperation? When the earlier offerings failed, did the Mayan respond by pressing deeper into the underworld making ever greater sacrifices?

It seems so. Deeper still we encountered an artifact so startling it elicited a scream from one of our members. A calcified human skull rests on the flowstone, its skeleton barely visible beneath centuries of accumulated silt.

We’re left to wonder what pressures brought the Mayan people to this place. Why they ventured into an area whose name means “place of fear” and what hardships drove them to seek relief through increasingly extreme sacrifices. If they thought the gods of death could be entertained and pacified by an offering of human flesh, they soon learned the thirst of evil is not so easily slaked.

Just ahead we found more skeletons, and more signs of increased desperation. These bones were not those of mere peasants. They bear the sings of privilege and the markings of elite tribes. The people murdered in these chambers came from the ruling ranks. These blood sacrifices were of the earthly powerful to the mighty divine.

But neither food, nor drink, nor gifts of human suffering satisfied the wicked gods.

High above, up a steep climb, we found a final chamber; the ninth level in this section of the cave. Inside rests a lone female, whose bones show remarkable density for people of this period. She was a young, healthy woman from the upper echelons of Mayan society, her back so cleanly broken we could see the separation from a distance.

In front of us lay the “Crystal Maiden.” This young woman, possibly a priestess, was the greatest gift to the underworld. Left to suffer and die for the enjoyment of the gods. She died in vain. Despite all attempts to appease their gods the great Mayan civilization succumbed to its pressures. There were no more sacrifices. The Empire had fallen.