A Visa Run to Penang 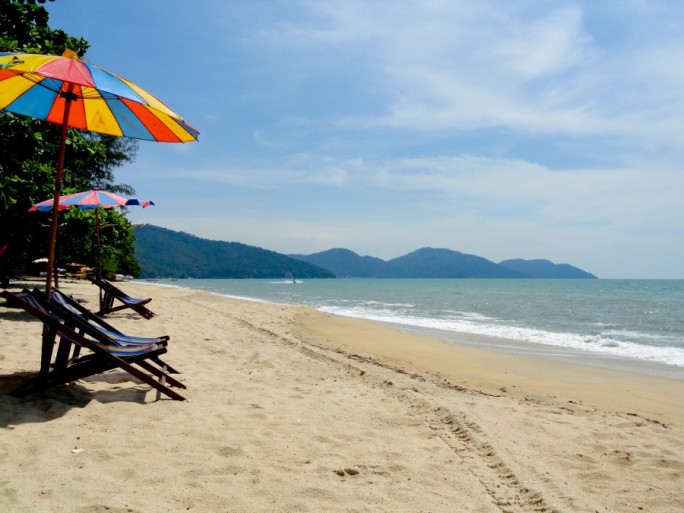 The way it works when traveling to Thailand, for people of most nationalities, is that you get a free 30-day visa upon entry. Of course, it’s possible to apply for a longer visa before coming, but this requires money/forms/a trip to the nearest embassy or consulate… In short, it’s a hassle. And getting the 30-day visa couldn’t be easier.

But for those who decide to become employed in Thailand (or simply decide to stay longer because, you know, it’s warm and beautiful and whatnot) an exit and reentry is necessary before those 30 days are up, or it’ll be Overstay Fine Central (I believe the going rate these days is 500 Baht [$18]/day). And at this point, if you’ve decided that maybe it does make sense to apply for a visa that allows you to stay for longer than a month, a full-blown Visa Run is probably the option for you.

As an English teacher living in the south of Thailand, when the time came for my Visa Run it made the most sense to head south to an island off the west coast of Malaysia called Penang. A 2.5 hour minibus ride from my town of Thung Song to the larger Thai city of Hat Yai, followed by a 6-or-so hour minibus ride across the border found me in front of Banana Penang at around 9 o’clock PM. If you ever find yourself visa running in Penang, look them up. My large double room with A/C (and a shared bathroom) was just RM40 (40 Malaysian Ringgit, that is– just over $10) a night, and I decided to save myself a hectic trip to the visa office and have them take care of filing my papers for another RM40.

A Non-Immigrant B visa (the necessary document that allows foreigners to obtain work permits in Thailand) takes a day-and-a-half to process, but as I’d left the visa sorting-out to Banana, I had an entire day to kill before picking up my passport the next morning. I began my day-long adventure in the UNESCO World Heritage area of George Town (where I was staying) and ended in Batu Ferringhi (a nice beachy area to the northwest). George Town is known for its beautiful, well-preserved architecture and interesting blend of cultures. In some ways it felt a bit like China, but it also boasted a Little India area and there was a certain Thai element thrown in as well.

The heart of George Town.

A Hindu temple on the way to Little India.

Malaysian Ringgit, roughly 3 to the dollar.

After a long walk along the coast and a cheap bus ride for the last leg, I finally made it to Batu Ferringhi. I’d understood it to be a popular tourist beach, but instead the place was deserted!

A beautiful mosque at dusk.

A sucker for Indian food, I had no choice but to make my way back to Little India for dinner that night. Some satisfying curry at Restoran Kapitan did just the trick and then, exhausted from my big day, it was back to Banana for me.

In the morning, Banana shuttled me off to the visa office (Passports must be picked up in person and payment is made in cash during pickup. A Non-Immigrant B visa runs you RM220.) and after picking up a pizza to-go from Ecco it was time to take the ferry to the mainland. Going home I’d decided to try out the train to Hat Yai, and the trains only depart from Butterworth. I understand there’s a fee for the ferry going to Penang, but in the direction I was heading it was completely free, which is always a plus!

In all, I found Penang to be an interesting, vibrant place that left me eager to see more of Malaysia.

Bidding farewell to Penang; the view from the ferry.

Read more from this author at: http://thaimeofmylife4.wordpress.com.