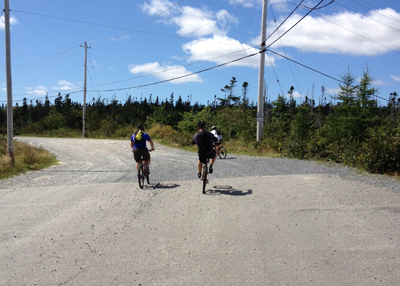 As a kid growing up in New Glasgow, my friends and I biked everywhere all the time.  Streets, fields, trails, power lines, dry river beds and trailblazing, nothing was off limits.  To us, it wasn’t so much about finding a challenging ride as it was to find a good secluded place to build a fort.  Like most kids, we were also fearless, bombing down hills among trees, riding up and down flights of stairs and hitting jumps wherever we could.  My body is a map of faint scars from all the dives I took off my bike as a kid.

As an adult, my cycling has become more about commuting.  The trails I ride are best described as flat, even and (often) paved.  Still, a part of me has missed past rides through rocks, tree roots and inclines.  This all changed a few weeks back.  I was shopping for a wok at a local kitchen store when the manager and I got into a conversation on biking.  During the conversation, he mentioned a nearby trail called “The Whopper Dropper”.

Soon after, I was talking to @brightwhite on Twitter about cycling.  Since I knew he was a serious mountain biker, I asked him about the Whopper Dropper.  After assessing my experience level, and warning me about the difficulty (the last two noobs he took on the Whopper Dropper ended up with concussions), he offered to take me out for a ride.

We arranged to meet at the Burger King in Bayers Lake (get it?) along with a few other Twitter folks.  Jeff lent me his spare Norco (my 18 year old bike wouldn’t cut it for this kind of riding) and off we went.

The trail starts off easy enough, riding over the smooth rock outcroppings that are found throughout mainland Halifax.  Someone was thoughtful enough to indicate the trails with yellow arrows.  We hit the trail in spurts, regrouping often so Jeff could brief us on what to expect and the challenges presented in the next section of trail.

There’s a fair bit of jargon with this kind of cycling.  My guide often talked about “rolls” and “gaps”.  A roll is when you go down a steep inclining by keeping your tires on the ground (even at a 60 degree angle).  For a roll you need to hover your butt behind the seat and keep your hand off your front brake at all costs.  A gap is when you jump with a good amount of speed and pulling up on your handlebars.

The pictures don’t do it justice, check out the video below:

It may seem a little counter-intuitive, but gaps are way less frightening than rolls, especially when you see the drop at the Whopper Dropper II. There are well-maintained bridges throughout the course, both to get across rough or muddy terrain and to test your balance well above the ground. As a dancer my balance is pretty good so I had a lot of fun with these.  By the end of the ride I was hitting some more jumps, going a little higher every time.  As for rolling, I decided to bypass that skill for now.

The riding was both challenging and rewarding.  We were all sweating within minutes and there were a lot of grunts, groans and expletives coming from most of us.  But I also had an ear-to-ear grin on my face the whole time and it felt like I was reliving my childhood.  It was a great ride, a lot of fun and a good workout that I am definitely interested in doing again.

You can follow more of our adventures at www.thelocaltravelerns.com