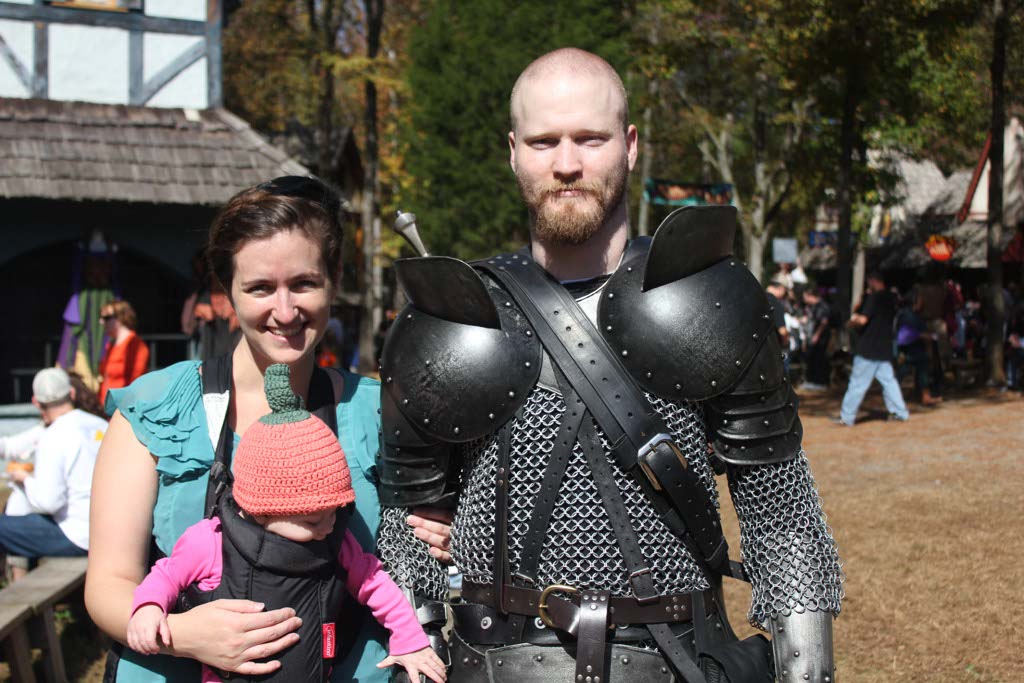 I’m no stranger to dinner theaters or interactive entertainment shows, but I’d never been to

a Renaissance festival so when I heard that Carolina hosts one of the most interactive entertainment festivals ever created with wonderful amusements and entertainment around every corner, The Carolina Renaissance Festival, I knew I had to check it out. The 20 acre Carolina Renaissance Festival is a 16th century European style art and entertainment festival combining outdoor theater, circus entertainment, charming cottages and castles, an arts and crafts marketplace, a jousting tournament, kitchens and pubs, a petting zoo, and an unusual collection of people-powered rides and games of skill.  As a family, we took advantage of the skill games, animal encounters, and a tournament of champions joust. The festival was both unique and entertaining with enough “bizarre” to keep us guessing what was going to appear before our eyes next.

The village streets were full of peasants singing songs and street entertainers surprising us with tall tales and tricks, each with a role to play.

The grounds were littered with games of skill and rides for the entire family. We watched

as children rode the World’s Largest Rocking Horse, took a spin on Da Vinci’s Flying Machine, and sailed the high seas on the Voyage to the New World.

I even gave Jacob’s Ladder a try, although it was an ill attempt at climbing the ladder. Jacob’s ladder is one of those things that you say, “Oh, that looks easy. I can do that.” Then, you try it for yourself and realize, “Nope! I’m an idiot and can’t get off the first rung.”

During our visit to the petting zoo, we rode a camel. With Athena on my lap, we straddled the camel and took it for a lap around the field. Athena has already been on an airplane 8 times and rode a camel; not bad for six months old. She’ll be flying helicopters and checking off her own bucket list in no time.

We witnessed the clashing of armor and the thundering of hooves with full combat jousts at the King’s Tournament Arena during the Tournament of Champions, and I received some hands-on experience with one of the jousters.

After camel riding, endless entertainment, exploring the Artisan Marketplace and watching the tournament, we had to try the staple turkey leg before leaving the festival. It doesn’t get much more “Renaissance” than a juicy, dripping leg of meat and a pint of beer.

The Carolina Renaissance Festival was a medieval amusement park, an interactive circus, a village marketplace, an arts and crafts fair, a jousting tournament, a zoo, and a feast all rolled into one family day of exploration.