Journey up the Gold Coast: AUSTRALIA 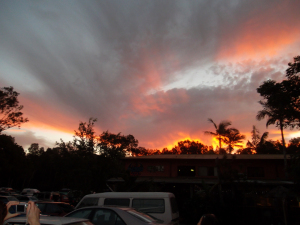 Studying abroad is everything and nothing like I’ve expected. Traveling on the weekends, uni events throughout the week, and as much as I would like to I can’t completely forget that I am actually attending classes here, too. Whatever the case, I definitely do not want to lose these memories as time goes by. I traveled with old and new friends for a weekend to the Gold Coast! Translation: Warm weather, beaches, hippies and the most relaxed atmosphere that makes you never want to leave…

I’m starting slightly off point, but it’s worth mentioning the extreme difference between airport security in the US and Australia. For example, they may or may not ask to see your ID before issuing you a boarding pass. They definitely don’t care about shaving razors in your carry-on or bringing full liters of water through security. A cell phone in your pocket won’t set off the metal detector and if you take your shoes off they’ll probably look at you like you’re crazy. Like I said, different!

We stayed in a funky hostel in Byron Bay called the Arts Factory. Every inch of the building and surrounding area is covered in paintings, murals and drawings that epitomize the free-spirited atmosphere. Interestingly enough, none of the bars in town sold shots to customers because they don’t support over-intoxication.

We had a high class breakfast the next morning of PB&Js along with a communal bottle of something pretending to be cheap orange juice. It’s all part of the backpacker’s budget! We soaked in the sun on the beach and attempted to swim in the ocean. It didn’t take us long to realize why we were the only ones wearing bikinis in the water after being thrashed around by the huge, tunneling waves.

Before this trip, I had been told by many different people that Byron Bay is the kind of place that people go to see and end up staying for years. It’s a haven for surfers who Sunset at the hostel

always sat out on the ocean horizon waiting to catch the ideal wave. It was like being in a movie to watch them ride monstor waves with an effortless ease.

That afternoon we set out on our mission to reach the small town of Nimbin. A “Mardi Grass” festival was being held there that weekend protesting Australian laws against cannabis.

Though we got horribly lost on the drive there and hit nearly every pot hole on the way, we eventually made it! The drive was long but beautiful. Cows grazed along rolling hillsides resembling what I’d imagine the countrysides of Ireland to look like. There really isn’t much to Nimbin, but we were all glad to have seen it for ourselves. It’s a trippy little town that was overflowing with people of all ages. Many people dressed in wild green outfits for the festival, most wearing tie dye and sporting dreads in their hair. Small groups held improvised jam sessions along the sidewalks with assorted instruments while others

danced to the music. We knew this place had to be different when a group of young people passed by us…meowing…as we walked into town. Again, not weird, different! We explored the tents set up selling various food or gift items, listened to a band, and then headed back for the long drive back to Byron.The few days we had on the Gold Coast were absolutely packed with activities. Everywhere we looked we saw more things we wished we had time for. A huge Sunday market was set up in Byron and theme parks and water parks dotted our drive up and down the coast.

The next day was Monday, our last full day. Once again we were up early on the beach and walked around more of the town. There were great little surf and beach shops where you could rent boards, buy clothes and more. Unfortunately (as usual) the prices didn’t fall into anyone’s budget.

We made another decently long drive to Surfer’s Paradise before moving on to the Steve Irwin zoo. Everyone would have liked to stay longer in Paradise if we had the time. It’s a vibrant little city with skyscrapers, a beautiful beach and dozens of surfers riding expertly on the waves.

The Steve Irwin Zoo, otherwise known as The Australian Zoo, was the biggest I have ever been to. It hosts about 2,000 animals and has recently expanded a new ‘Africa’ exhibit. We saw enormous crocodiles, giraffes, zebras, a shy rhino, as well as cheetahs and wombats walking around on leashes. No matter how old I get, I will always love going to the zoo.

We fed elephants fruit out of our hands and saw some of the world’s deadliest snakes. Tasmanian Devils ran in crazed circles around their enclosure while three otters next door chatted away, playfully chasing one another over logs and in the water.

On the drive back to Byron Bay, we stopped briefly in Brisbane to explore what the city

had to offer. Other than a giant, lit up ferris wheel, it wasn’t too exciting but was another major city we could check off our Australia bucket lists.

With the Irwin family statue

That night we stayed up talking with a group of Russians back at our hostel. They asked us nearly every generic question about us as Americans that you could imagine, “Do you Americans like music?” “You wear sweatpants to look like the Little Wayne?” “So you like Twilight, yes?” We’re also pretty certain they lied to us about everything we asked them. I’ve said before in previous entries that the best part of traveling can be the people you meet along the way. Well, I suppose you’re always going to find all kinds.

Meeting international travelers who have spent a decent amount of time backpacking or work/traveling is always a highlight of any trip. After consistently meeting so many new, different people, you stop focusing conversation on your differences and instead find easy discussion in all that you share in common. It’s fantastic finding unexpected, easy friendship in people from across the world. Even when it is sadly short-term. A wombat sleeping with its teddy bear!

On our final morning, we laid on the beach for one last time before heading to the airport. These three days on the Gold Coast flew by faster than any others so far. A traveling friend commented that throughout the quick paced, packed days, we were all really pushed to work together cohesively under stressful situations with people we had only just met. It’s interesting that by this point in my travels, I hardly notice these seemingly obvious situations anymore.

Enjoying the sunshine on Byron Beach

In the past, it would have absolutely been a personal challenge, but now I think a large part of me has changed. I can feel myself growing as an individual since I first arrived here. I think that since diving headfirst outside of everything that has been comfortable to me, I’m slowly finding a confidence I didn’t realize was in me.