Memories of a Burmese Train Ride (Not your Average Photo Essay…) 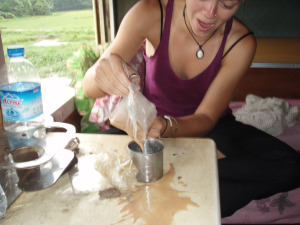 Having seen The Darjeeling Limited at least a half-dozen times, I really thought I knew what to expect from train travel in a country that, although not the same as India, at least borders it. But after two 20-hour train rides in Burma, I’m telling you: you couldn’t know what to expect.

With only one day to plan and five days to see Burma, my friend and I decided that in addition to visiting Rangoon (which we flew into), we would squeeze in a trip to Bagan, a city about 400 miles north. Flights were expensive and we read a review that said something along the lines of, “If you value your life at all, do not take a bus,” so we decided our best mode of transportation was the $40/way overnight train recommended by the article.

Hey, here’s a travel tip for everyone: Read. More. Than. One. Review.

Turns out, Burmese trains are a bit outdated. And by a bit, I mean by like, forty years. The ride was wild — the word “bumpy” doesn’t do it justice. The smell of the sheets during our first ride has been burned into my brain forever. And this was all in the second-highest-class sleeper car, a nice luxury for this train. One other tourist group occupied a similar car, and the rest of the passengers were locals who slept on regular wooden bench seats. So yeah, I realize I’m evil for complaining about this.

But really, I don’t have any complaints. Looking back, these trips are easily some of the funniest and most memorable of my time in Asia. That said, I can’t really recommend that others take Burmese trains. Not because of the smelly sheets or the cockroach or the earthquake-like ride, but because money paid for railway tickets goes to the government, which, if you care about human rights, justice, or really anything at all, is not something you want to support. (We didn’t realize this until after we bought our tickets, by the way.) Plus, the trains cost about double the price and time as buses. Still, stepping onto this train was like a time-warp that was definitely worth experiencing, if only once.

Most photo essays are artsy and beautiful and tell a story without many words. This isn’t one of those. For the record, my “photo essay” isn’t meant to diss on this wondeful country or its trains. It’s just an honest depiction of my then-horrible-now-hilarious experience. And so, since this story can really only be told in pictures, here’s a compilation of some of my (and my friend Michelle’s) finest work to date. I know they’re just pictures, but if you want to start comparing us to Wes Anderson now, feel free.

It all began on this platform at the Yangon (Rangoon) Central Railway Station. Looks pretty nice, right?

My vegetarian dinner request was met with white (left) instead of dark chicken meat. I’m going to go ahead and conclude that most Burmese aren’t vegetarians, so hey, it’s the thought that counts.

This was as flat as Michelle’s bed got. “Maybe one day we’ll laugh about this.”

What you can see in this picture was our private bathroom, complete with toilet, sink and shower. What you can’t see is that the shower was actually just a hole in the roof that leaked rain water all night. This was fine with us since the sink didn’t actually work.

This little guy, let’s call him Gregor, introduced himself to us in the middle of the night. I’m sad to report he quickly had a violent run-in with a newspaper.

Apparently our breakfast stop was out of “the usual” (cake and coffee). Instead, our window waiter brought fried dough with gravy and chai tea in plastic bags (that’s the chai hanging on the fan control).

Hey, at least we had a cup.