Take to the Skies in Iquique, Chile 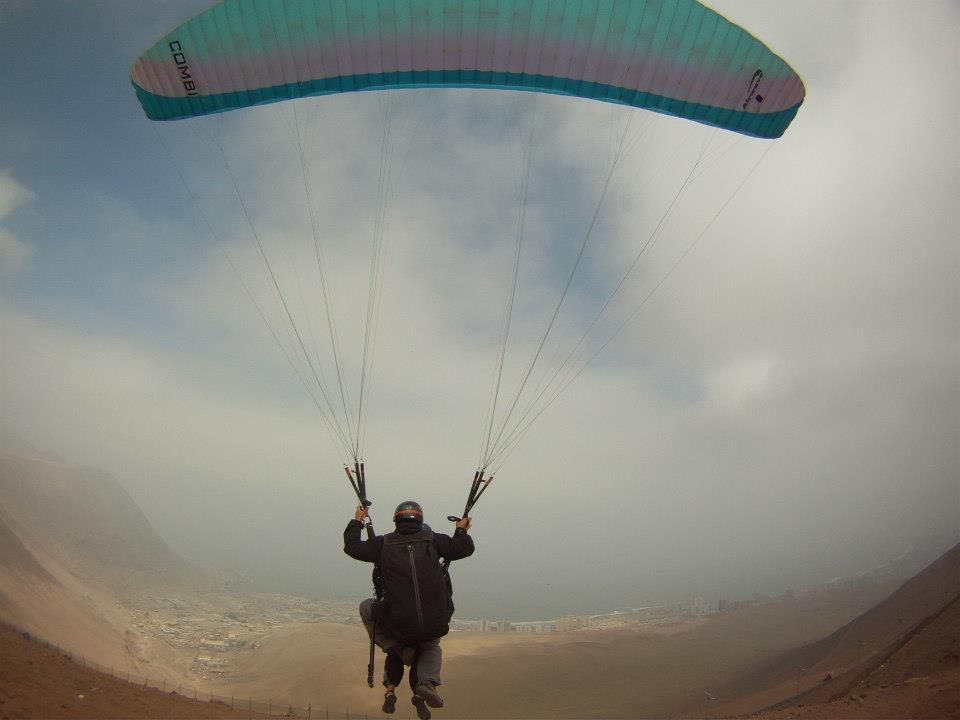 boarding. Surf shops and ice cream stores line the beautiful palm treed walkway along Playa Cavancha, the city’s principal surfing beach. Within walking distance is Playa Brava. This beach’s powerful undertow makes it unsafe for swimming, but its warm sand and impeccable views of the setting sun make it a popular (but less tourist-filled) place for relaxation, beach sports, and sunset yoga.

While the beaches may be the main attraction, a very different adventure awaits you in the red sand hills of the Atacama Desert that act as the city’s backdrop. This desert was used by NASA as a testing site for the Mars Rover before heading into space, and the landscape’s similarity to that of Mars is incredible. It feels like you’ve entered a different world. Apart from being the practicing ground for future otherworldly expeditions, these hills are also the jumping-off point for one of Iquique’s most popular tourist attractions: Paragliding. Or parapente as the locals call it.

Early in the morning on a Thursday in September, two friends and I met with our three tour guides from the parapente tour company Puro Vuelo. During the short van ride up the steep red cliffs they gave us a brief run-through of what awaited us at the top. We reached a large open plateau marked specifically for parapente take offs. Each of us was given a body suit to wear and a harness and seat was attached to our torsos. The pilots unfolded our huge fabric parachutes behind us and we took off one at a time. I was the most terrified, so I went first. My pilot, who had 20 years of parapente experience, started off standing shoulder to shoulder with me. I was facing the edge of the cliff, all of Iquique, and the ocean beyond, and he was facing behind me towards the parachute. Then he told me to start walking. Slowly, slowly, I began to walk, until I felt the tug of the wind at my rapidly opening parachute. My pilot then somehow managed to attach himself behind me as we briskly walked right of the edge of the cliff and into the air.

The beauty of parapente is that you’re not falling, you’re gliding. Parapente trips can last for hours. For us, at the price of $35,000 Chilean pesos (about US$70), we were up in the air for half an hour. The ride is smooth and tranquil. Despite this fact, however, about halfway through the ride I started getting a familiar feeling in the pit of my stomach: the very quick onset of motion sickness. A word to the wise: if you suffer from motion sickness this WILL make you uncomfortable. Is it still worth it? Absolutely. Was I doubled over on the beach on the brink of puking up my breakfast once we landed? Most definitely. Would I do it again? In a heartbeat. I’m quite sure it’s the closest I’ll ever be to feeling like a bird, to truly feeling like I’m flying. My pilot took us up high, made a few circles over the city, took us down so we were gliding along with the traffic that was climbing the hills, and then started making his way slowly slowly towards the beach. There we made a very soft landing in the white sand as our parachute floated gently to the ground behind us. The perfect flight. An absolutely essential experience for anyone making their way to the shores of Iquique, Chile.