Zipping Through the Canopy in Manuel Antonio, Costa Rica 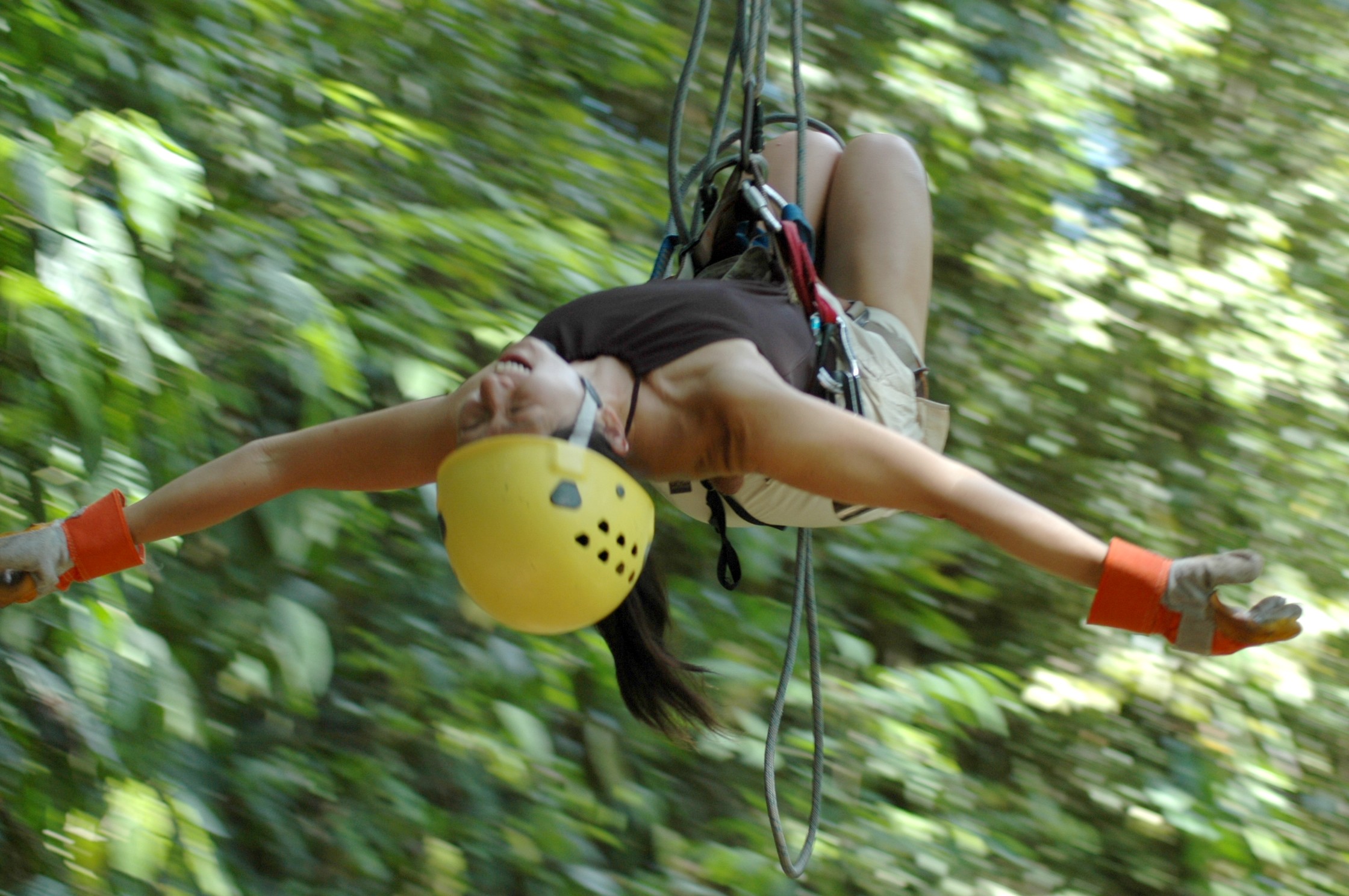 I didn’t want to go ziplining. It wasn’t fear of heights – I have none. It wasn’t lack of faith in the operator’s equipment – I had faith, since it’s very bad business to send tourists plummeting to their deaths on the forest floor. I didn’t want to go because it just seemed so, well, ‘touristy’ somehow. I envisioned testosterone-ridden Spring Break types hooting and high-fiving. I envisioned paunchy couples from flat Midwestern states asking our guides if poison dart frogs were poisonous, if in fact they were frogs. I envisioned crowds and their commensurate noise. I have an aversion to human noise, particularly when it occurs in nature. In short, I didn’t want to go because I was being stubborn and self-righteous and stupid.

Fortunately, my wife and in-laws won out, and we set out from our rental house in Manuel Antonio, Costa Rica early one morning, leaving the kids with their grandparents. A van brought us to the hotel that serves as staging area for the Titi Canopy Tour and were introduced to our guides, code-named Porcupine and Bumblebee. I don’t know why. Porcupine and his apian companion turned out to be personable young men, amusing and entertaining without their schtick being in any way cheesy or canned. They were genuine, genial, and enthusiastic, and when we were told we needed to choose nicknames and I, put on the spot and lacking anything better, chose El Guapo – the handsome one – Porcupine laughed heartily and clapped me companionably on the shoulder.

Far from the crowds I had feared, the four of us were the only ones on the tour, and we soon hopped back in a van to be driven to the trail head where the tour begins. Within moments of getting out of the van, a chestnut-mandibled toucan landed in the branches above us and began to tweeze off fruit with his gloriously bi-colored bill. It was our only toucan of the trip, and it was spectacular. A hundred or so meters along the trail, we ran into our first green and black poison dart frog, the first we had seen in Costa Rica. As a devoted herpetophile, I had spent much of the past two weeks scouring the landscape for reptiles and amphibians, and here was a remarkable specimen right in the middle of the path. Even if we had gone home at that point it would have been a great trip, but it just got better.

After a brief run-through on equipment and technique, we hit our first zip line. For me the zipping was tremendous fun, but you don’t see much wildlife when you’re zooming along above the trees. The tree-top platforms, however, make excellent wildlife viewing stations, and it wasn’t long before we got close-up views of squirrel monkeys, three-toed sloths, and a black howler monkey (our only sighting of the trip, although we had heard their low, throaty rumblings rippling through the darkened forest the night before). Along the paths that link some of the zipline stations, we ran into more poison dart frogs, a trogon (a brightly-colored rainforest bird related to the famed quetzel), and had a mot-mot – another brilliant forest bird with extravagant blue pads extending like canoe paddles from its tail – land within two meters of where we stood. It had been the best wildlife viewing of our time in Costa Rica, even better than Manuel Antonio National Park, but there was more to come. Our final activities were a “Tarzan Swing” and a controlled plunge back down to the forest floor called something along the lines of the “Drop of Death”, or “Drop of Doom” or the “Drop of Doom, Death, Pestilence, Insanity and General Misfortune.” I can’t recall, exactly. As we crossed a swaying suspension bridge back to the hotel, we peered into the stream below to see a caiman basking on the banks and a massively-plumed male basilisk sunning himself on a rock. I had been wrong about the zipline tour, and as I sat drinking fresh juice and eating the fruit that had been laid out for us, I was blissful enough to admit it. Silently. To myself. Actually, at that point I was so overjoyed that I would have admitted anything, and wanted to hug everyone in sight. Porcupine and Bumblebee settled for a handshake and a tip.