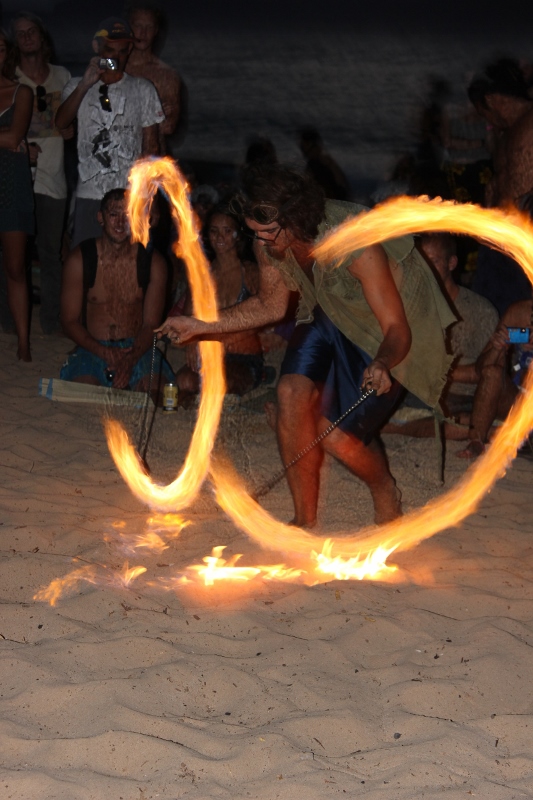 At Makena Beach State Park, there lies two beaches; one is Big Beach and the other, Little Beach. In the hushed late hours of the evening, a lush and festive noise rises from a craggy mountainous wall. It entices you to leave the calm of one and the desire of the other.

After climbing the stone path, you exhale a sigh of relief once you gain footing on solid ground. An unofficial island host presents himself to the women before me, offering them a chance to buy a little happiness. Weed, toke, ganja is for sale. When the women declined, his only replies is that he just wants people to feel good and enjoy themselves. I laugh and continue to photograph the area from my new vantage point before losing the setting sun. When I turn, literally, the sound of drums direct me where I need to be.

Before moving forward I must mention one thing. Little beach allows nudity and this was new for me. For this first timer it became a comical what or what not to do sense of etiquette when confronted with a naked body. Once I descended the sandy trail, I paused to gather myself. After scanning the area, I viewed several pale bodies frolicking among the ocean waves.

After moving past the bikini clad teens, I continued to move towards the rhythm of the drums. My first mistake was made when I looked towards my right and saw a couple in the full Monty causing my eyes to dart away. After that it was a free for all, some peopled clothed, others partially and yet others skin on skin contact. I continued towards the drum line as dancing, gyrating bodies moved in and out of beat of the music. The smell of musty bodies and alcohol weaved in and out of the crowd while laughter and conversations reached as high as the music level.

Let the rhythm move you

Dumbec, djembe and congas fill the air with pulsating vibes. The saturated sweaty bodies of the players glisten as their taut muscles refuse to surrender to pain. The crowd begins to thin as the drummers, after hours of continuous playing, finally fade away. Occasionally, someone else will take over where another left off, trying to pick up the pace again. The sunset layers the sky and people begin to form a circle in anticipation of the fire performers.

They come with light, flames that begin to dance in the sky. As the owners of torches and other instruments, the area around us takes on a new canvas. The dancers twirl, jump and spin as the flames twist and turn and look like paintings in the sky. Oohs and ah’s from the crowd entice the players even more and the show continues.

The darkness envelops us and its time to go, at least for me, after an hour. Without a flashlight, I follow the fading glow of flashlight ahead of me while retracing my steps back to the stone wall. The kindness of strangers proved enough light along with a tiki torch to aid several of us down the rough rock path and to the safety of the sand of Big beach. From the wildness of one life to the quiet of another, I can chalk up another lesson learned in human spirit. 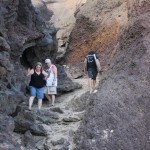 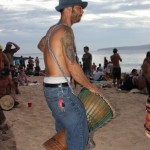 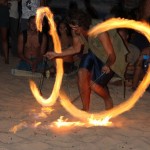 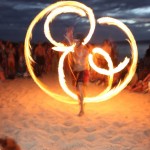 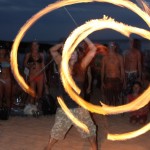 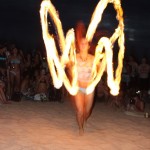