Speak Slowly, and No Sudden Moves

By: talesfromthemotherland Posted in: Destination, Jerusalem 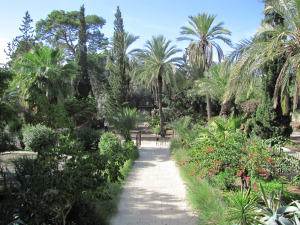 Featured writer: Tales from the Motherland

Jet lag, or re-entry, after a long trip, is rough. Despite the fact that I had the most amazing time in Israel, by the time I got to North America Monday night— as in Toronto, Canada, and just shy of 30 hours into my travel—I was seriously doubting the intelligence of traveling to the store, let alone 7,000 miles for eight days of vacation with my daughter. I still had another 4.5 hour flight ahead of me, and an hour’s drive home. Brain cells were melting by the mile. I was feeling pretty optimistic when the day started. I woke up Sunday at 5 am (albeit a teeny bit early) in Jerusalem. I was packed, and ready, and my girl and I took the bus to Tel Aviv (a beautiful trip) to visit an old friend, I knew when I lived in Chicago 20 years ago, as well as to catch my flight later that day. We spent the day seeing Tel Aviv and Old Jaffa, with my friend. It was a gorgeous day; the city of old Jaffa is incredible, and Tel Aviv was a surprisingly beautiful city—modern, and right on the ocean. That night we had a kick ass dinner at a kosher steak house in Tel Aviv, put my girl on a bus back to Jerusalem, and then I went to the airport at midnight, for what should have been a twenty-four hour trip home.

It was one kick in the teeth after another, from that point on. I had stayed awake all day planning to go through security and sleep at the gate, from 12-5:30, when my flight was scheduled to take off. It seemed like such a good plan, until it was so terribly not. I was informed that I wouldn’t be allowed to go through security until 3:30, which meant sitting in a big waiting area, with very little to do or see, and no place to really sleep. I walked, I sat, I walked. I ate an ice cream bar. I walked some more. When I did get to security, it was a breeze— a pleasant surprise, after all of the warnings I’d had about Israeli security. Apparently I don’t look like much of a security risk to Israelis, because all week I breezed through check points, security points and all forms of checks. Don’t get me wrong, they look in your bags… as in empty your carefully packed suitcase and then say “Ok, you’re free to go.” Good thing I’d made sure each item was configured perfectly in that suitcase! There were several security checks, and they all seemed miles apart, before I made it to the main terminal. It is a huge circular terminal, with food courts and all kinds of shopping. All I wanted to do was sleep, but I kept thinking that I’d be better off waiting for my flight, and then I’d sleep all the way to Frankfurt (my 1st shop) and then some more on the 11 hour flight from Frankfurt to Seattle. None of it turned out the way I figured however. Instead, there was delay after delay, until the incredibly rude and unbelievably disorganized Israeli staff at Lufthansa, told us all that we wouldn’t get off the ground until about noon— yes, noon, as in nearly 7 hours late! In addition, I had checked flights from Frankfurt (where there was a snow storm) on my laptop, and had learned that my connection was already gone, and there were no more until some time late Tuesday. I was not getting on that flight, but Lufthansa was not making it easy to reroute me either.

I’ll spare you the miserable details of just how bad the staff at Lufthansa was… I’m sorry, but it really has everything to do with Israeli customer service (which does not really exist) and little to do with that particular airlines. It was not until I got all Israeli (read: bossy, aggressive and demanding) on them, that I got a seat for me and my wonderful partner in crime (an Argentinian man from Boston) on a flight to Toronto, and then on to Vancouver. I was not willing to go anywhere near Europe and its snow storm, but I figured that from Toronto I had the best chance of eventually getting home. What a trip it all was! By the time I staggered off the plane in Vancouver, I’d been up for 53 hours (except for 2 brief naps on each of my flights) and I’d started out from the airport 35 hours earlier.

When I woke up this morning, I was totally disoriented. I immediately looked for my girl, who I’ve shared a small queen sized bed with, for the last 9 nights. It hit me again, with a lump in my throat, that she is so far away. Each hour that I waited, each mile that I traveled, was a reminder of just how far away from us she is, and that was really hard. It made the travel that much more brutal, as I imagined when I’ll see her next. It made it that much harder, as I tried to hold on to the warm fuzzies I felt all week with her. It was just all around hard.

Today, everything felt jarring. Smart Guy asked me to meet him for lunch and I could barely stand the crowd at the restaurant. Every time someone spoke to me, it felt like they were talking really fast. Sudden moves made my head ortswim. A sofa has been the only solid place to be, most of the day.

I’m missing the incredible scenery, spectacular food, and wonderful people that I experienced each day that I was in Israel. They may not be great at customer service, but the Israeli people are my kind of people in so many other ways. They’re direct, wry, and passionate. They don’t use false pleasantries; what you see is what you get. They live in a land surrounded by threats, but they live a life filled with culture and magic. Everywhere we went, I was reminded of the awe-inspiring history and faith that has been a part of that land and people. The birthplace of Christianity, the Muslim faith and Judaism, I was humbled to stand in the crypt where Christ is believed to be buried (a much debated point, but close by for sure); moved to hear the call to prayer many nights while I was there, and I was surrounded by so many levels of Judaism, it was unreal! It was the first time in the 23 years that I’ve been raising Jewish children, that most of the people around me were Jewish, not just the like minded folks at our synagogue. Orthodox Jews on the streets of Jerusalem

That in itself was the biggest eye opener in Israel, the stunning diversity of the Jewish people— and the overall level of open faith, that was everywhere I looked. Here at home, I have raised my children as minorities. They have always known that as Jews, they do not fit in entirely. The other Jews that they know are generally members of our synagogue; meaning: their Jewish role models were from very similar backgrounds as their dad, his family, and me. There hasn’t been much diversity. They have each experienced numerous attacks on their character, based solely on the Judaism. “Dirty Jew,” “Hey Jew,” “You’re the best/worst/funniest/Jew I know,” has been uttered to each of them, in the public schools they’ve attended. More than once. They have had a small pool of Jewish friends to draw from, and again, few examples of what a Jewish community looks like.

In Israel, so many of the people you encounter are Jewish, that it quickly becomes the norm. The man taking my order at the sandwich shop; the woman sitting beside me on the bus, saying her prayers; the strongly Orthodox or Hassidic men in their black hats, long coats, and with their long curls; as well as the store owners, the person working at kosher McDonalds, and most cab drivers, or each laborer and citizen you encounter, is just as likely to be Jewish, in Israel, than anyone else you see. That was a huge thing for me to see, and clearly a major reason that my daughter feels so happy there. She can practice her faith, surrounded by countless others who share that faith, or at least get it.

When I was in my twenties, Israel had been at the top of my Bucket List (though I didn’t know the term then), but over the years, it had become a place that made me nervous. The military issues and tensions are in the news constantly; it turned me around. Having my daughter move there left me further conflicted and torn. I wanted to hate Israel. I really did. I resented the entire country for wooing my girl, and keeping her. I resented the fact that she found it such a special place, that she would leave us and everything she loves here, to live there. Instead, I fell in love too. It got under my skin, and I found myself moved each day, each night, with each and every experience I had. My senses, my thoughts, my very being was altered each day— cast under the spell of a place that has moved so many other people, that it has become a bulls eye for conflict, passion, and meaning, to people of countless faiths and backgrounds. I wanted to see Israel as just another trip, just another vacation, but it was so much bigger than that, so much more astounding, on virtually every level. In the next few posts, I’ll try and share some of the wonders that made this all so fantastic. I could write more than one post on the food alone! That I walked and hiked and was active every single day, and still came back 5 pounds heavier, is a testament to food that rocked my world, each and every meal. I can say honestly, that I had only one bad meal (at a spa of all places), the entire time I was there… and every other meal was sublime. I could write several posts on faith. Mine was challenged, and rocked, and pushed to new limits. Would it be overstating to say that maybe I (re)found God? Probably not, but I’m still figuring that one out. I have never discussed faith with so many people, in such interesting and stimulating venues. I was interviewed by a French documentary team regarding my thoughts on Jesus; I shared countless intellectual discussions with young people about Judaism, and I was challenged to think about God and faith each day I was there. The experience was life changing.

There is so much to share, but my brain is addled, my emotions raw, and the sofa is starting to spin. Ask me about it in a few days, when I’ve settled back in, and re-entry is not so jarring. When you do, speak slowly, and no sudden moves.

Do you love to travel? What’s your favorite place? What’s your worst travel story/ airlines headache. Share your thoughts in the comment section. Since it’s gray outside here, hit the Like and give me some sunshine. (Helps with the jet lag!) Check out Tales From the Motherland on Facebook for more updates, or follow TFTM on Twitter. As always, thank you to Bucket List Publications for including me on their amazing site.