An Adventure Beyond the Rabbit Hole- On The Lewis Carroll Trail With Ian Cai Mercer and Mr. Tiglet 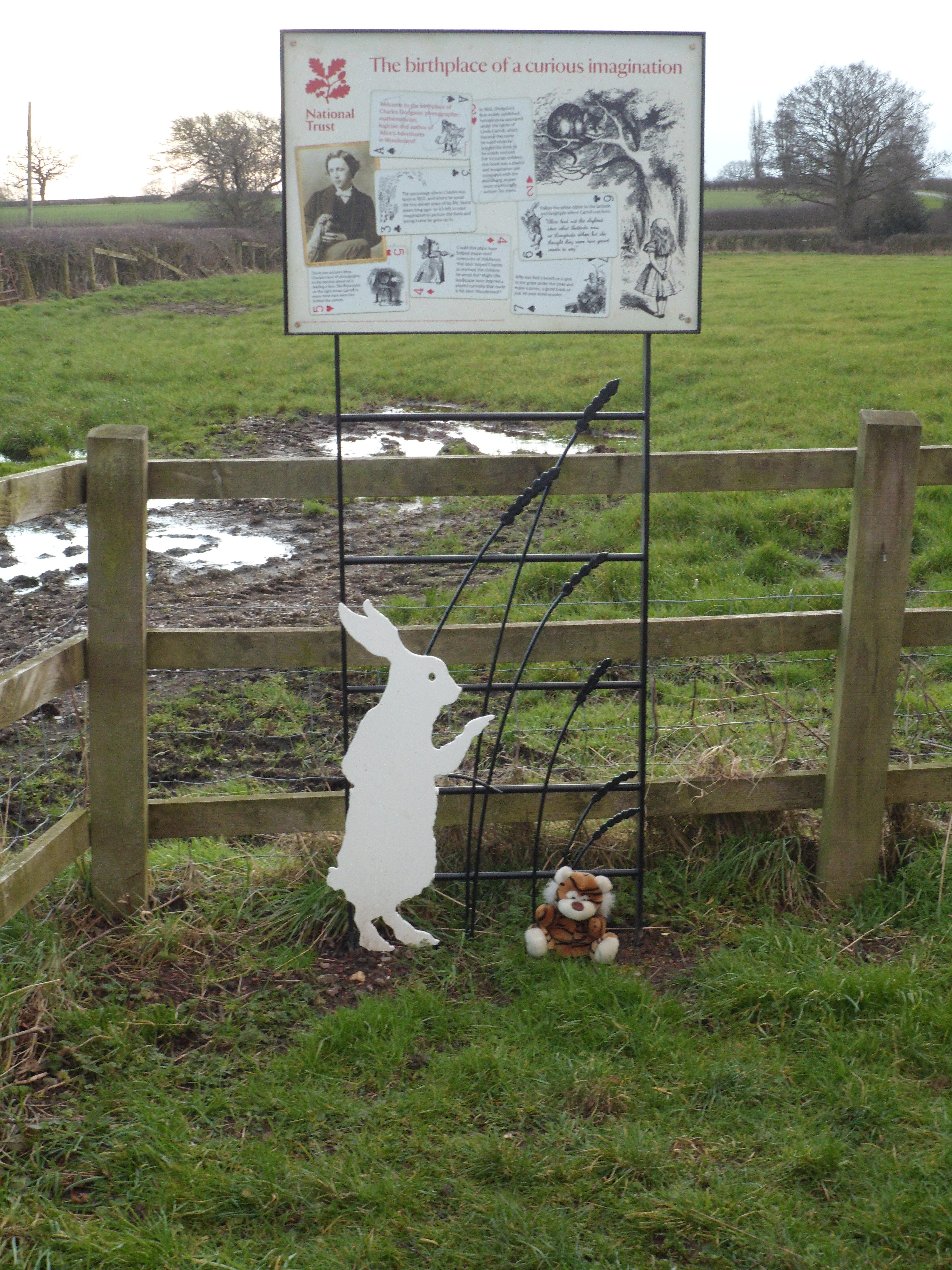 “You must feel like Alice, tumbling down the Rabbit hole?”- Morpheus to Neo- The Matrix

Lewis Carroll is most famously known for his Children’s Novels Alice in Wonderland and Through the Looking-Glass. He also wrote a variety of other material.  His Birthplace in the village of Daresbury on the outskirts of Halton is on several Walking routes. Even though I began at Walton Hall Gardens and trekked up the Bridgewater Canal to Daresbury, mostly in the Sun, but with a spot of Rain, it was a moderately nice day.

I took my little hiking buddy Mr.Tiglet with me, as he is a keen Rambler and has his own blog too! Daresbury Lab from the Canal

Daresbury Science Laboratory is a world-renowned institute and lies along the canal on part of Keckwick Hill, which is a nice stroll in itself, but I bypassed it to get into the village and to the Church itself, walking up Delph Lane. The views from the corner of the Lane and Chester Road are quite extensive, but you have to take care crossing the Dual Carriageway to make it to the village!

As you walk up to All Saints Church, you pass the Primary School, which has an interesting Weathervane In the shape of Alice, the White Rabbit and the Mad Hatter. The church itself was founded in the twelfth Century.  Lewis Carroll’s father, the Reverend Charles Dodgson (senior) was Vicar in 1827.  LC was born Charles Lutwidge Dodgson at the Parsonage, which was at Newton-near-Daresbury (over a mile away) on 27th January 1832, living there for eleven years.  He was the eldest of eleven children, those formative years laying the foundation for his storytelling. The Daniell Chapel within the Church contains the LC memorial window, a stained glass window of the Nativity, the panels below containing images from the Alice books.  There is also a Griffin carved into the Pulpit.

For a while this was the only link, then plans were made for a Visitor Centre, which was made into an extension of the church and opened at the end of 2011.

The Centre is a large Oval room with a number of panels depicting his life and how his ideas developed. Visitors are encouraged to go to his Birthplace site, which I did, following the roads rather than over fields.

It takes about half an hour, crossing the M56 Motorway, though footpaths are sparse, so keeping an eye out for traffic means you have to not let your attention wander too far on the surrounding scenery! The gate is on Higher Lane/Morphany Lane junction.  A Notice board and a White Rabbit greet you and then a path leads you up to the site where the Parsonage stood.

A nice wire frame, made by a local artist, outlines the walls while more info-boards describe where the Parsonage once stood

details of the house before it burned down in 1883.  It was decided to not rebuild it there, but in Daresbury village itself.

Just round the corner is Lewis Carroll Wood, which is a trail and a pond where he used to play. And that was the end of the Trail; I even managed to get a picture of the spectacular Sunset as I headed back into Halton.