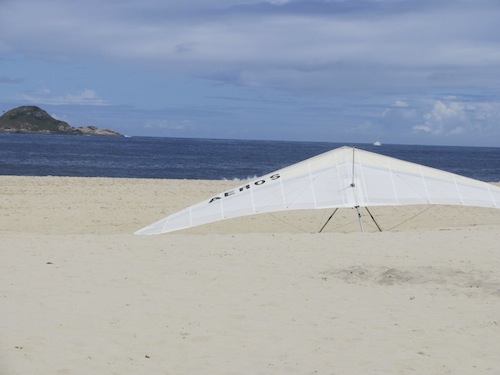 It was past midnight and we hadn’t started our all-night party session yet. The couple who I had met less than a week ago was sleeping in the bed next to me and were exhausted after a full day of dancing to street music during Carnival in Rio de Janeiro. I lay awake feeling spontaneously productive and decided to take a look at my bucket list. What bucket list could I do now? Picturing the high cliffs that are the trademark of my present jungle filled city, I realized hang gliding was my best option. I found a local guide and that was that.

I stepped out of the cab and a Brazilian man with a very heavy Portuguese accent and larger than necessary sunglasses escorted me to a small building to sign paperwork. “You might die”, “You waive all right to sue”, “This is an inherently dangerous activity” the contract warned. I had seen this before. Pursuing previous bucket list items, I have gone sky-diving, SCUBA diving, parasailing, bungee jumping and spar-poll climbing.

The Brazilian man and I got into something I can only describe as a Barbie car and we made our way up winding roads to the top of a nearby mountain.

In Brazil, Only The Extreme Drive Barbie Cars

I read more paperwork and the pilot/driver reiterated that I must keep running on take off.

We arrived at the very full launch site and strapped on a harness that seemed just a little too loose in most places and bit to tight in all the wrong places. I looked at the instructor skeptically. He hadn’t asked my name yet. With his heavy accent he said, “Seriously, don’t stop running.”

You Would Be Skeptical Too

We practiced running and we lined up our hang glider. I felt my stomach scrunch up but preceded forward to become a human kite runner. Quickly my mind wondered to the famous scene of Ben Franklin flying a kite in a lighting storm to discover electricity. This is clearly going to end well.

My guide looked me dead in the eyes and reiterated once more, “Don’t stop running. Two steps in the air”. Without warning, he started to run full speed and I raced to catch up. We got to the end of the ramp and instantly were pushed upward by the wind. It was a beautiful day in Rio de Janeiro and I was flying above the beach supported by 20 year old canvas and kite polls. My instructor complimented me on my running. “You kept running!”. Indeed, I had.

The first thing I noticed was how crowded the air was. There were giant birds, para-sailers and numerous other hang glider buddies. We soared around in the tropic air for about 30 minutes. It was nearly silent and there was only a slight breeze. Below was lush forests and the seemingly endless Atlantic Ocean. This was by far the best way to view paradise.

The Perfect Way To View Paradise

As we started our decent, it occurred to me that we hadn’t actually discussed this part. What was I supposed to do? Was I supposed to land on our knees or my butt? About 100 feet from the ground, my instructor told me the answer I should have know, “keep running”. I grinned and got in a sprinting pose.

The Little Detail of Landing

We hit the ground going approximately “no miles per hour” and came to an instantaneous stop. I had barely made a single stride in my mock sprint. We had landed on one of Rio’s picture-perfect beaches and we walked up to enjoy a beer on the boardwalk. Five minutes later a driver picked me up and dropped me off at my hotel. I had 20 minutes before I was scheduled to meet my friends to go see Christ the Redeemer, Rio’s world famous landmark.

I smiled, pursuing my bucket list had worked its magic again.