My Date with Goliath the 170kg Tortoise 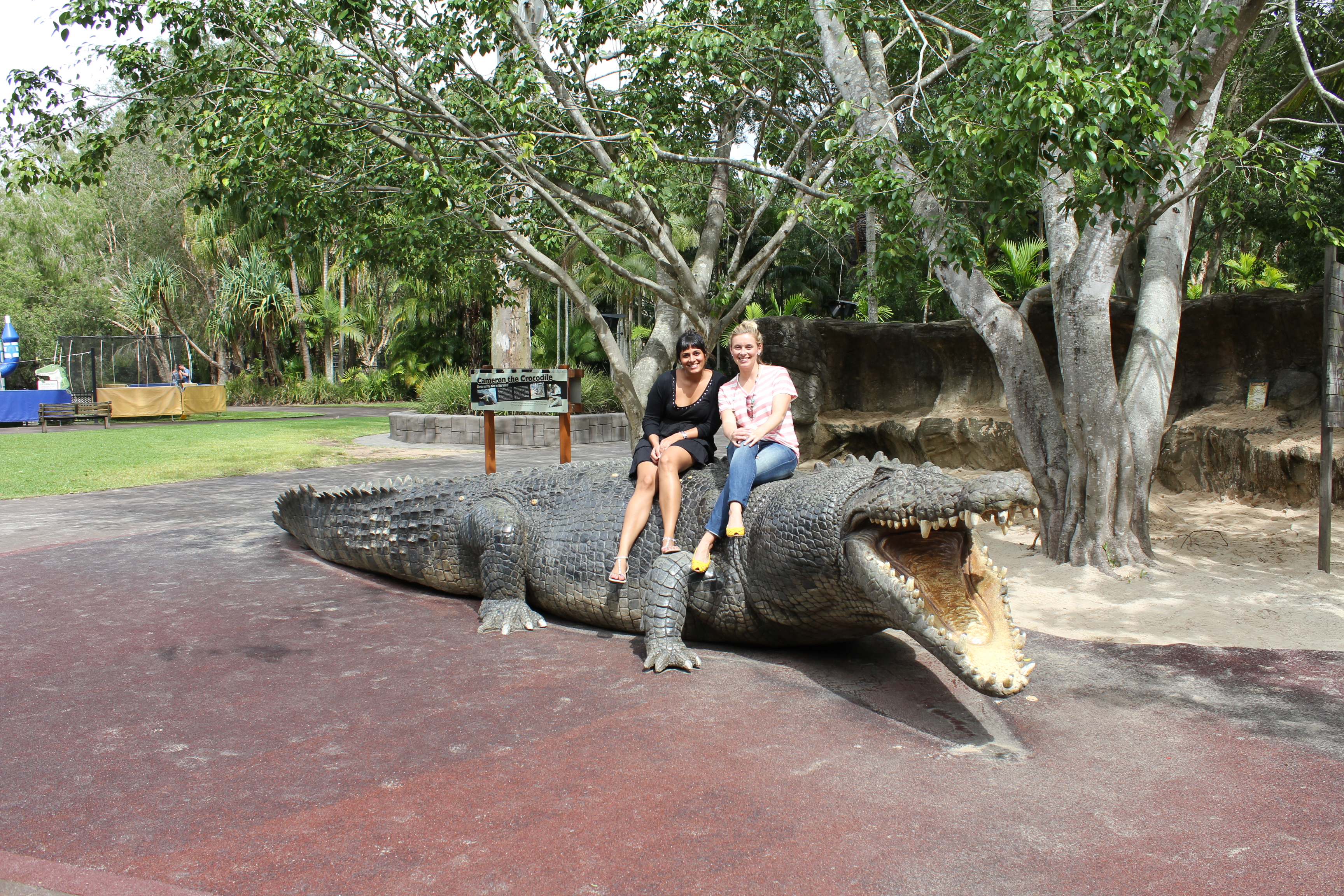 Featured writer: Brooke Falvey
I recently left behind the bright lights of Brisbane, Australia, and headed for the khaki wonderland that is Australia Zoo.

It was an adventure that had been months in the making; a plan between my friend Reshni and I that we would do a road trip to Beerwah on the Sunshine Coast to visit the home of The Crocodile Hunter, the late Steve Irwin.

After six hours of walking, talking and occasionally squealing our way around the zoo we discovered that while it is still the place ‘where crocs rule’, there is so much more to this green patch of hinterland.
Like many Aussie icons, Australia Zoo comes from humble beginnings; it opened in 1970 as the Beerwah Reptile and Fauna Park, a two acre wildlife park run by Bob and Lyn Irwin and their son Steve.
It was home to native wildlife such as Lace Monitors, Tiger Snakes, Freshwater Crocodiles, Magpie Geese and kangaroos.
These days, there are animals from across the world and plans are underway to build a new ‘cheetah run’ as part of the Africa habitat, taking the zoo to almost 100 acres.
Unlike other wildlife park’s, Australia Zoo encourages interactions between a number of the park’s inhabitants and visitors and within five minutes of entry we had broken the cardinal rule to never smile at a crocodile.

This five-year-old croc seemed happy enough to have his tail manhandled (and squeezed … I couldn’t help myself) but I did refrain from pointing out he’d make a lovely clutch bag!
As part of the zoo’s Roving Wildlife experience, visitors can meet koalas, wombats, possums, dingoes,blue-tongue lizards, shingleback skinks, pythons, baby American alligators, macaws, cockatoos and more.
Photographs are encouraged and if you make the mistake of leaving your camera behind (not recommended), the Australia Zoo photographers are always on hand to snap a shot of you with the roving wildlife which can be purchased(prices start at $9.95).
With so many animals to see, Resh and I had put together a list of things not to miss which included hand-feeding the gorgeous Asian elephants, catching the ‘wildlife warriors’ show in the Crocoseum and visiting the Tiger Temple and wide open plans of the African exhibit.
First up was hand-feeding the elephants, which takes place twice daily—at 10.30am and 3pm—in the South East Asia exhibit which is lush, green and features giant Asian-inspired tiger statues and lots of bamboo.
We had the opportunity to feed Sabu—a female elephant who is known for her love of food, which gave us something in common although it turns out she was far more excited about eating a bucketful of greens than I’d have been!
While waiting our turn we learnt that elephants trunks are made entirely of muscle … which is why you should never wrestle one for food.
As I clutched on to some greens Sabu and she quickly wrapped her trunk around my rather child-like hand, whipping the food away and leaving behind a trail smelly elephant slobber behind. I loved it.
It was amazing to stand less than two meters from such a magnificent animal, especially one whose ancestors have roamed the earth for hundreds of years.
Despite her size, Sabu was gentle in her demeanor and clearly loved being the centre of attention.

After our elephant encounter (and a pit stop to wash our hands), we made our way to the Africa exhibit which is home to giraffe, a couple of zebras, cheetah and the two-tonne southern white rhinoceros.

It’s a bit of a walk from one side of the zoo to the other, but there are options available for those who aren’t up for the walk—you can hire a motorised scooter (the kind they have in shopping centers) for $25 or, if you’re happy to splurge, you can hire a 5-seater golf caddy—with your very own caddy chauffeur—for $450.
During our first stop in Africa (we made two) we were lucky to catch at glimpse of the newest member of the rhino family, Mango, who was born to parents DJ and Inyeti at Australia Zoo in February and made her public debut over Easter.
The second rhino to be born in Queensland, Mango weighed between 40-50kgs at birth but is now putting on close to a kilogram a day.
The southern white rhinoceros are considered ‘near threatened’ by the International Union for Conservation of Nature due to poaching threats and illegal use of rhino horn.
I also learnt they like to wallow in mud because it acts as a natural sunscreen, insects repellent and a beauty aid to remove dead skin (mud wrap, anyone?).
Despite their name, the rhinos are actually grey in colour with their name a misinterpretation of the Afrikaans word “weit”, meaning wide.

While the day was filled with memorable moments, none could compare with my up close encounter with two Aldabran tortoises.
The brothers–Igloo and Goliath–are native to the islands of Aldabra Atoll in the Seychelles, north of Madagascar and they can grow to roughly one metre tall and can weigh as much 300 kilograms.
They can also live to be up to 200 years old and weigh up to 300 kg, which makes Igloo and Goliath, aged in their mid 30s and weighing about 170 kg each, heavyweight toddlers.

The tortoise ‘Animal Encounter’ cost $30 on top of our entry cost ($53 through RACQ) and it was worth every minute to get close to these prehistoric wonders.
Under the watchful eye of zookeeper Jess, we posed for photos, scratching and rubbing the gentle giants under the neck to keep them happy (and stop them from stepping on our feet).
We spent close to 20 minutes in the enclosure with the boys, chatting to Jess about what they eat (they are herbivores and their favourite foods are vegetables and hibiscus leaves), how the zoo’s breeding program is going (there are another two Aldabran tortoises living on a man-made island near the Africa exhibit) and what it’s like to work at the zoo.
Both Igloo and Goliath seemed fascinated in not only my exposed knee, but also my hair (possibly mistaking it for some form of straw … nom nom nom!).

After collecting the photos we had ordered from our tortoise experience and also the elephant feeding, we decided it was time to farewell the animals and head back to Brisbane.

But before we hit the road again, we had one last thing to cross off our ‘not to miss’ list—a visit to the Australia Park Wildlife Hospital, which is located across the car park from Australia Zoo.

Opened in March 2004, the hospital—which has the scope to treat approximately 10,000 patients annually—was inspired by the memory of Lyn Irwin who was a pioneer in wildlife care in Queensland.
The hospital includes an intensive care room and laboratory as well as separate holding facilities for males and females and diseased and non-diseased koalas.
There is also an orphan enclosure designed specifically to allow hand-raised koalas to develop climbing skills and minimise contact with human carers before being released back into the bush.
For $2, we were able to take a ‘sneak peek’ at the workings of the hospital—and it’s staff and volunteers—through glass walls, although if you are keen to see more, you can book a behind-the-scenes tour.
We peered through the glass to watch as vets worked on a small bird that had been brought in injured but for me, the most heartbreaking sight was that of a small koala sitting on the floor with his leg bandaged. He looked so sad.

The gorgeous little fella—Peri—had been attacked by two dogs in Bahrs Scrub (almost than two hours away from the hospital) and had been brought to the Australia Zoo Wildlife Hospital for treatment on his fractured arm.
Sadly, Peri isn’t alone as approximately 70 per cent of the hospital’s patients are victims of car accidents or domestic pet attacks.

After such an amazing day of discovery and enjoyment, a visit to the wildlife hospital was a good way to remind ourselves of the importance of looking after our wildlife—not just those native to Australia—but worldwide.
« Previous Post
Next Post »