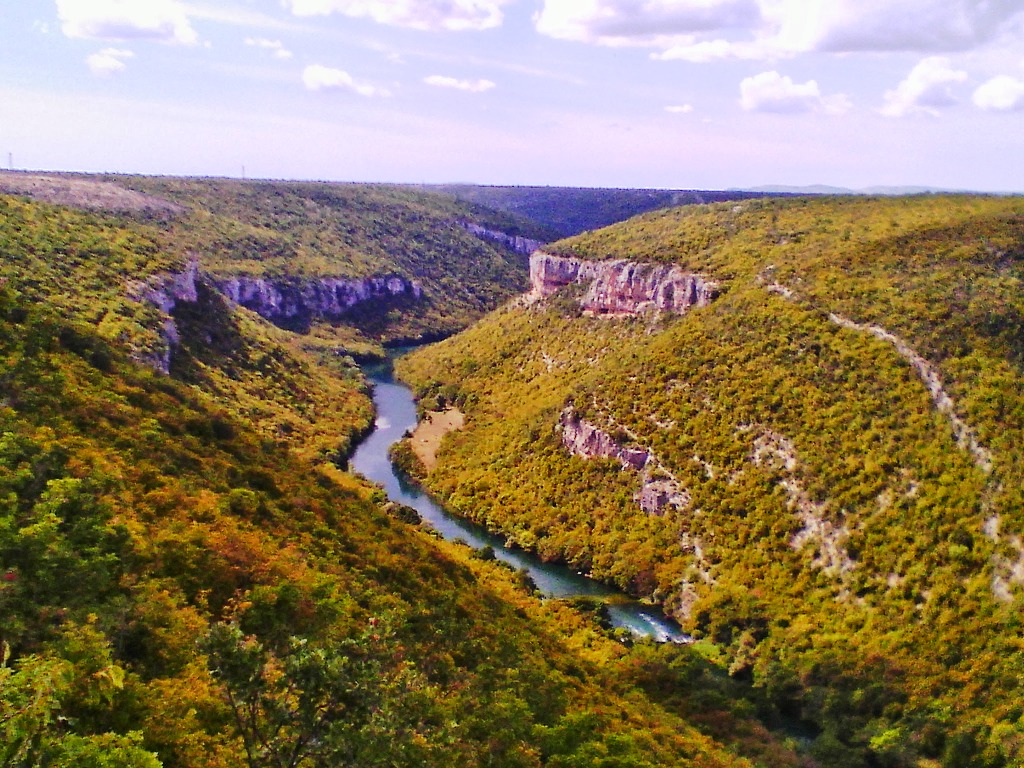 In 1985, 45 square miles of the Krka River basin was proclaimed Krka National Park.  Flowing only 45 miles from its spring-fed source to the Adriatic Sea, the Krka River offers stunning scenery.  Like most of the rivers in Croatia, the Krka is clean and pure enough to drink, which may be why the Romans saw fit to build structures in the area now included in the national park.  Several sites are undergoing archeological study and preservation. Skradin, a safe harbor for yachts

The coastal entrance to Krka National Park is via Skradin, a picturesque town just upriver from the Dalmatian Coast city of Šibenik.  Skradin is accessible by yacht from the sea.  The locals are known for respecting the anonymity of the rich and famous people who visit their town.  They are proud to drop a few famous names of visitors like Prince Rainier, the Sultan of Brunei, Bill and Melinda Gates, and assorted movie and sports celebrities who come to Skradin to escape the paparazzi and autograph seekers. Just upriver from Skradin is one of Croatia’s best known natural wonders, Skradinski Falls, a series of travertine falls formed by calcium deposits.  A series of bridges and footpaths allow for year-round viewing of the falls, the renovated water mills, and the site of one of the world’s first hydroelectric power plants.  Nikola Tesla, the inventor of the AC generator, grew up nearby, and the power plant that provided electricity to the coast cities of Šibenik and Split incorporated his design and began operation only two days after the world’s first hydroelectric plant opened at Niagara Falls in 1895.  A nearby plant still operates as part of Tesla’s legacy. Mike stands near the falls

Due to the rising sea level over the past 10,000 years, the water at the base of the Skradinski Falls is a mixture of fresh water and the salt water estuary from the coast.  All the water flowing over the falls is pure and fresh.  This unique environment provides habitat for over 800 species of plants as well as a variety of amphibians, reptiles and fish.  The Krka basin is also important as one of Europe’s foremost spring and autumn bird migration areas. Remains of a Roman legion base

The Krka basin is often referred to as the cradle of Croatian History.  The Krka River served as the dividing line between powerful ruling families in the region during the Middle Ages.  Each family built fortresses along the Krka River, basically to keep an eye on one another.  Wars only broke out when invaders from the Ottoman Empire or Eastern Europe encroached on the territory.  The strength of the ruling families along the Krka allowed for stability and trade in the region. Economic growth gave power and prestige to the ruling families whose descendents remained in power until the 16th century. Medieval fortresses facing one another across the Krka River

Today, visitors to Krka National Park are treated to the natural beauty of the upper Krka River, the historical treasures of earlier civilizations, and the modern comforts of some of Croatia’s most charming villages and towns along the Dalmatian Coast.  When the weather gets hot there is the inviting clear water of the Krka River and the beaches along the coast.  And when you get hungry you can sample the great food, the local wines and the hospitality that makes people who discover Croatia keep coming back. The last fortress was abandoned 500 years ago.

Note:  Author, Mike Lince, and his wife Florence are The 6 Monthers, so called because they have chosen to live in a different country every six months.  They are currently living in Scotland, and they just returned from touring Croatia as journalists.  Mike will share a new story about Croatia while the memories are still fresh.  Photos of the journey appear on The 6 Monthers Facebook page.