Into the Wind in Southern California 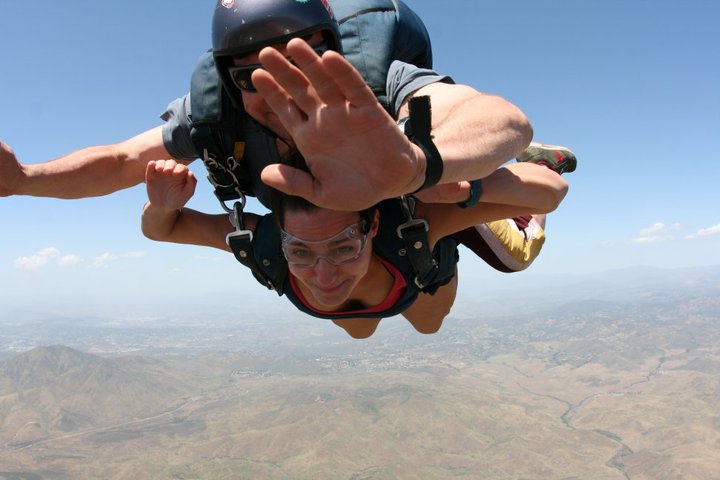 Amelia Earhart once said, “Adventure is worthwhile in its self.”  This belief, along with our shared attitudes about altitude, encouraged me to try the engine-free flight options in southern California.

The entire southern coast offers numerous ways to fly into the wind. Whether you crave the thrill of bungee jumping, prefer the extreme, heart-racing pleasure of sky-diving or a serene paragliding flight, southern California is home to a variety of air sports set above the state’s beautiful, yet rugged terrain. Come along with me on my engine-free journey and see which activity brings you to new heights. See you in the skies.

The Bridge to Nowhere in Angeles National Forest provided a 120-foot platform, or what appears to be a toothpick as I stepped over the ledge to what could possibly be my final moments, for an unforgettable bungee jumping experience.

Set deep in the San Gabriel Canyon, all guests meet at 7:30 am for a 5 mile hike over a rocky, rough trail that leads to the bridge. The trail crosses a creek 6 times in up to three feet of water. This part of the journey alone is not for the faint at heart.

By the time I reached the bridge, I was tired and wet but my adrenaline kicked things up a notch; I was keenly aware of the Goliath stone bridge that rose up from the jagged rocks and rushing water below.

While standing on the edge of the bridge, steep canyon walls were rising about me. A short lesson was given on the bungee system and safety and before I knew it, I was up and about to go down. I climbed over the ledge; my sweaty hands gripped the rail, my throat was dry and my heart seemed to be pumping in my ears. Looking down at the raging water ten stories below, I heard the encouragement of the instructor as he began the countdown, “5-4-3-2-1-BUNGEE!”

I let go of the rail and star-fish leapt off of the tiny platform to a free fall. I found myself plummeting through the wind; the water and rocks below were getting closer and closer. Just when I thought I was getting too close to my impending doom, I felt the bungee cord begin to slow me down, but the journey was not quite over yet; A few feet shy of the water, I found myself being flung straight up toward the bridge and plummeting again and again and again with a series of bounces. With each bounce, a scream of excitement escaped my throat.

Once I finished bouncing, I was elated with happiness and adrenaline. Overcoming the initial, internal fear that numbs your body makes you feel like you can do anything. The sense of accomplishment is overwhelming. I wanted that indescribable, free-falling feeling to last forever!

If river crossing, rugged terrain and bungee cords are not your thing, my next journey may be your “flight of fancy”. My incurable thirst for adrenaline and flight was feed by a 13,000 foot skydiving adventure with Skydive San Diego. Over 2 miles above southern California, you have a visual vantage point that few people ever experience so clearly. With nothing obstructing your view, the wind rushing in your face and free falling through the air at 120 mph, your senses are heighted to a level of euphoria.

For me, skydiving with Skydive San Diego, http://skydivesandiego.com/, had two major advantages over bungee jumping with Bungee America. First, I didn’t need to hike 5 miles before getting to the real experience- the airplane and the instructor did the job for me and I could concentrate entirely on the activity I wanted to do in first place. Second, in skydiving I could reach higher altitudes and enjoy the euphoric state of free falling for extended periods of time (I was in free fall for over 60 seconds). The feeling of the free fall before the parachute is opened is something that can’t be compared to anything.

While looking out the window during the plane ride, it becomes blatantly obvious that you are about to partake in something completely unnatural.

“I’m okay. Yes, everything is going to be fine,” were my initial thoughts but as the ground became smaller and the buildings became specs, my thoughts turned to “What if I’m gonna die? This is stupid. What the hell was I thinking?”

My stomach was rolling like I was on a fighter jet and my thoughts must have been written in my face. My instructor initiated the usual chit-chat but it all sounded like a Peanuts character talking to me; I nodded my head in understanding but I heard nothing.

Finally, we were at 13,000 feet and I left my body. Like a robot, I had no control. I did what my instructor and the photographer told me to do without thinking.

“Walk to the door. Get on your knees. Lean your head back. Smile.”

Before I processed what was actually happening, I was out of the plane and in the air. I was too busy smiling and breathing and keeping my eyes wide open to really realize I was falling, but I was. I was falling at 120 mph and it was like a dream. But not like the scary dreams where you’re falling and you think you’re going to crash. It was more like a peaceful falling and with my instructor strapped to my back; I felt a false sense of safety. I saw water and mountains for miles and I was laughing internally. The outer-body experience while free-falling seemed to last a lifetime. It was beautiful. I was beautiful. I could conquer the world.

The 7 minute journey back to the ground was surreal and I breathed a breath that was fresh and new. I was hooked. As we soared to the ground with a large red and white wing above our heads, I took in the stunning scenery that is southern California. A joy that I didn’t know existed took place as we turned and glided through the sky with the parachute open. Free falling was only part of the journey.

I wasn’t ready for a solo skydiving experience, but I wanted the power of controlling the parachute and it was then that I decided to try paragliding.

Eagle Paragliding, http://www.eagleparagliding.com/, is known as the best choice for all levels of paragliding training in the United States so I was off to Santa Barbara to pilot my own glider. The sense of accomplishment I gained by controlling my own flight increased my confidence and had a positive influence on my professional and personal life. It was only during paragliding that I finally felt complete accomplishment, control and freedom.

The advantages of solo paragliding over tandem skydiving are mostly two: in paragliding you have more control. You make the turns and control your landing. The second major advantage of paragliding is that you don’t need an airplane to lift you – just find a hill, run and start flying.

After a brief, but thorough, training session, it was time to leave the safety of the ground behind and head into the skies. The owner and trainer, Robb, along with his entire staff, has a dedication and passion for teaching that surpassed all of my expectations. Although I was nervous for my first flight, I felt confident and in control. The two-way-radio was my security blanket as I prepared for flight.

I was weak in the knees and my adrenaline was pumping as I spread my wings and ran along the training hill for take-off. I left my comfort zone behind and launched away from the site. It was a breath of fresh air, literally. I was soaring like a bird with elegance and grace. That initial flight was one of the most shamelessly joyous moments in my life.

The feelings of paragliding and skydiving are often compared, but it is a misconception. While paragliding, I felt a kind of steady clarity rather than the wild, sharp adrenaline rush while skydiving. Soaring in almost total silence with nothing obstructing your view is so peaceful and serene that I felt as if something changed inside of me. Over the course of the 8 hour day, I become more confident in my flights. The effortlessness of movement once airborne gives you enthusiasm that you could have been a bird in a previous life. It was this experience, more than all the others that truly made me feel like I was flying.

My engine-free journey changed the way I view flight, adventure, and life. The initial surge of adrenaline while bungee jumping, the heart-racing, full minute of uncontrolled free-falling while skydiving and the freedom of soaring while paragliding will stay with me for the rest of my life, but I have not conquered the skies; I’m just beginning, and southern California will allow me to do just that.

“The helicopter is evidence of how man’s imagination can be given physical form.” ~Wheeler, Howard A. – My first helicopter lesson

Come Be Part of the Sky – My First Airplane Pilot Lesson