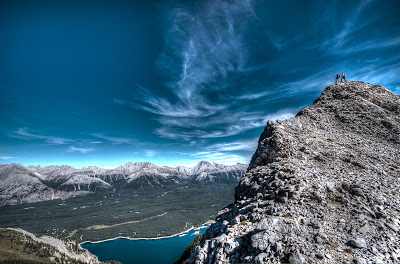 I can’t remember when I learned about this hike, but ever since I was informed of its epic-ness, I’ve wanted to conquer it. That was a couple of years ago. I remember saying to Dan last year that I had a good hike in mind, but winning the Big Mountain Challenge introduced other mountains to climb. Fast forward to this past weekend. I knew Dan and Aidan wanted a good hike. Better than good. An epic show-stopper, in fact. I also wanted a new mountain summit under my belt. Indefatigable was a clear choice.
Before Saturday, I called the Kananaskis Visitor’s Centre to inquire about Indefatigable. It turns out the trail was decommissioned back in 2005. Did that mean we shouldn’t hike it? According to the guide, it’s definitely hike-able. Due to high grizzly activity in the area, the trail was constantly being closed when it was an official Kananaskis trail. Now that it’s decommissioned, it’s hike-at-your-own-risk. Thankfully the trail is extremely well travelled. So on Saturday, we were up early and made our way to the North Interlakes parking lot in Peter Lougheed Provincial Park with one simple goal: Conquer Mount Indefatigable. (Spoiler alert: No, we didn’t encounter any grizzlies thank goodness, but I was very much expecting that this would be the first time I would cross paths with one while hiking. Phew!)
Mount Indefatigable has two peaks: the popular south peak, and the more difficult scramble to the north peak. An amazing ridge walk connects the two. When we started the trek, I thought we’d ascend to the south peak. We quickly emerged from the tree line to absolutely incredible views of the Kananaskis Lakes on either side. Mountains stretched far in the distance. We had hiked less than an hour and we were awe-struck. The weather was perfect that day too. Perhaps the giddiness helped boost our confidence. Or perhaps we were overzealous. Either way, we decided: Let’s just do the north peak and traverse the ridge! It was still early in the day, so why not?!
Here’s the thing: Alan Kane rates the north peak and traverse as a difficult scramble. According to his rating system, difficult scrambles require much handholding; steep, loose and exposed sections; smooth and down-sloping rocks; and risks of falling to your death. Up until Saturday, I had never completed a difficult Alan Kane scramble. Despite not having helmets for head protection, we decided to go for it. Smart? Not at all. Live and learn: a helmet is an upcoming purchase. But I’m glad we pushed through because it ended up being one of the most difficult and thrilling scrambles I’ve done in the Rockies. And boy had I been itching for a good scramble all season.
We trekked onward through forests while looking behind us at the amazing views. There were bear prints and evidence of ungulates (which I think were from the mountain goats we spotted!). We passed a dried up tarn and stopped for lunch right before the scramble to the north peak. To say that the scramble was sketch is a bit of an understatement. Dan, Aidan and I were in full concentration mode. A misstep could cause rocks to dislodge, and we did not want to be sliding down the mountain. Thankfully there was no one beneath us as Aidan accidentally sent rocks flying down the mountain. It also didn’t help that we took a wrong turn somewhere (or so we think). Hand-over-hand climbing went on for what seemed like a long time, but eventually we all made it to the summit. There would be no falling to our deaths on this mountain.
The views were absolutely incredible! I’ve hiked a lot of mountains, and I would rank the summit view in the top three, along with Mounts Sparrowhawk and Tyrwhitt. Maybe Eiffel too. We sat there for a while and took it all in. We also needed a rest- that scramble was intense! The traverse to the south peak was not nearly as scary as the ascent. In fact, I would say it wasn’t scary at all. Even though there were moments of crazy exposure and the ridge was narrow, there’s something amazing and oddly comforting about having steady footing on the ridge while the mountain drops on either side (see video below). In terms of ridge walks, this ranks highly along with Tent Ridge and Pocaterra Ridge, but takes the cake in terms of exposure and risk of falling. So much fun!
We snacked again at the South peak, and after remarking on how amazing the traverse had been, we made our descent. The views of the Kananaksis Lakes and surrounding mountains were just as amazing the second time around, now with different shadows and colours cast by the setting sun. The day ended 8 hours after we began, and the three of us were all smiles, extremely happy with our accomplishment. There were a lot of crazy awesome moments while conquering Mount Indefatiable… but what was the craziest thing I learned during the hike?
Aidan used to be a hair model for L’Oreal.
Mind. Blown!
Stats:
Start: 10:40 am
End: 6:40 pm
Elevation: 2670 m
Elevation gain: ~ 1000 m
Distance: ~ 9.5 km
« Previous Post
Next Post »