We had a Great Time at Adventure City Until This Happened‏ 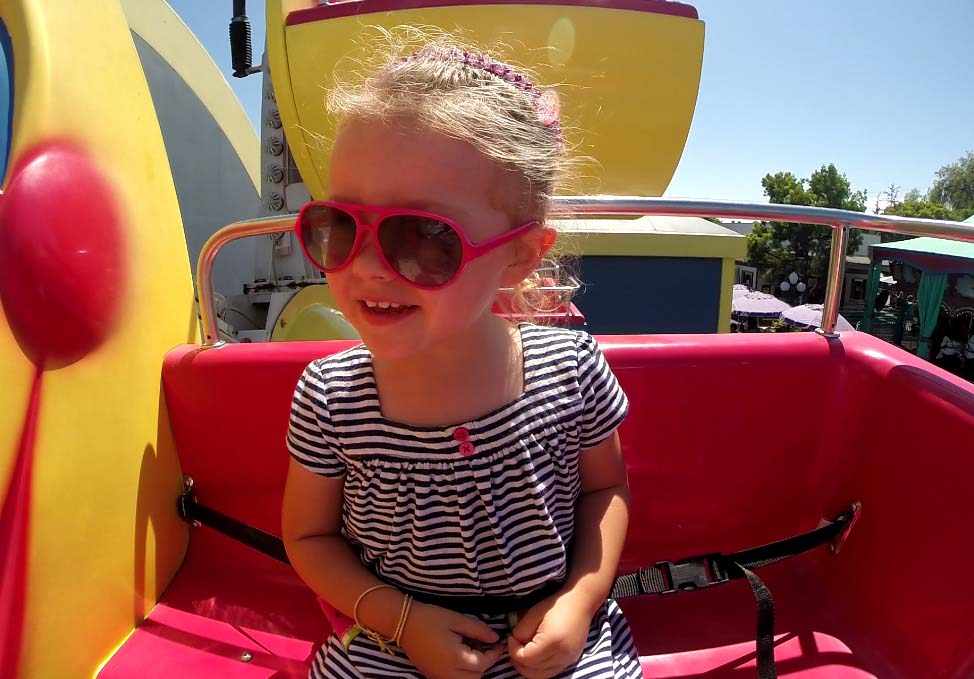 We’re back home in SoCal for three weeks, but that doesn’t mean we can’t have awesome adventures and new, unique experiences right here at our doorstep. Adventure City was on the list for this weekend. With 10 child-friendly rides, a rock climbing wall, a petting farm, a children’s theater, and an arcade, Adventure City is definitely worth the 5 Freeway traffic on Sunday. We were having a great time at Adventure City until this happened…. Oh the decisions we’re faced with as parents. Athena could ride the Carousel and Balloon Ride all day long and be completely content. It doesn’t matter how many times we go around on the Carousel, she’s still smiling and laughing. She picks a different horse every time and the ride becomes new again. I wish that that joyful innocence followed us throughout our entire life. Experiencing it through her is one of the best parts of being a parent. The Petting Farm had goats and chickens and was a huge hit as well. At first, Athena quietly watched as I petted a goat. Even though I think they are smelly, coarse-haired creatures, I rubbed it, brushed it, and put my face close to its face. I wanted her to know she had nothing to fear. After watching me for a few minutes, she crouched down next to me and thought about it a little more. Finally, she reached out and put her hand on him. He didn’t move and seemed to enjoy the interaction. That was all she needed. Within seconds, she grabbed a brush, sat down, and brushed the goat. She talked to him and giggled when he looked at her. (I don’t really know if it was a male or female goat but they seem too rough and smelly to be females so I’m calling it a male.) I had to bribe her with games at the arcade to get her to finally leave the Petting Farm. She has a love for animals that I hope continues into adulthood. In the arcade, we played every game there. They were all toddler-friendly enough that she could give them a try. Her favorite was shooting balls into a garbage can and air hockey. We had a $20 game card for the arcade and after an hour of playing, we still didn’t use it all. Each game gives tickets and we had 175 after one hour. Athena used them to get two squirt guns that we used in the tub when we got home. The joy of Adventure City continued well into the evening. We thought it was a perfect day until Athena asked to go on the roller coaster. When we were in Germany at Europa Park, she had asked repeatedly but none of them were small enough for her to ride. Adventure City’s Freeway Coast is the ultimate ride for pint-sized thrill seekers, but the minimum age is 3 years old. We’d done so many adventures rides and tried so many new things already that I figured she’d be okay. She begged and I agreed.

I lied to the ride attendant and said she was 3 years old (she won’t be 3 until April). We sat in the middle seat, I figured that was the least scary, and Darren sat behind us. I put my arm around her and held her securely next to me even though we had on a seat belt. She was beaming with excitement, smiling from ear to ear. The ride began and she was still smiling. Then, fear rushed across her face as we made the first drop and she said, “Too fast, Mommy!” But we were already going. I couldn’t stop it there. We had to go all the way around. I was never so grateful for a ride to end and then I realized we were going around again. She squeezed my hand and I held her tightly next to me to provide more security.

When it ended, I said, “Did you like it Athena? Are you okay?” “I liked it, Mommy. I don’t want to go again. It was too fast.” She was smiling again but couldn’t get off fast enough.

We finished the day with the Giggle Wheel to be certain we left on a positive note.

Adventure City is a small amusement park but it had a big impact on us. I don’t regret taking her on the ride. If she wants to push her comfort zone and it’s a safe situation, I’m okay with that. I push my limits daily; it’s part of life. Do you think we should encourage children to push the limits, in a safe way, or do you think there should be age restrictions?

I’m thankful that Adventure City is only a 20 minute drive. We’ll go back again soon and I’ll continue to encourage Athena to ride the roller coaster. Now that she knows what it’s like, she can decide for herself.